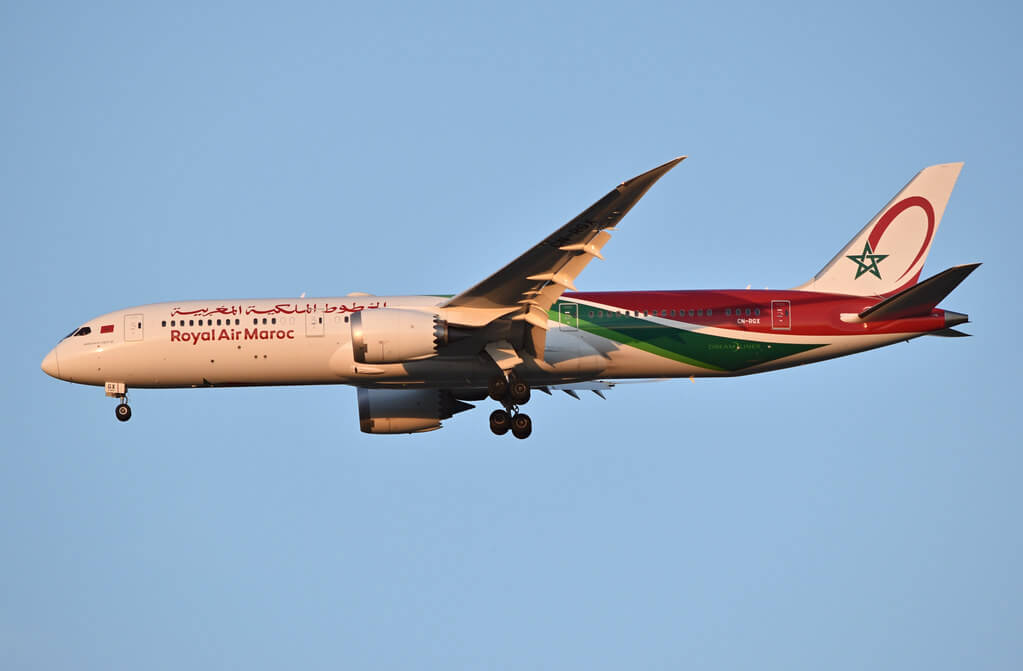 The new Dreamliner will be able to carry 302 passengers while introducing a brand new Business Class Cabin.

Joining the existing B787-8 aircraft, the new B787-9s will help to fill out the carrier’s long-haul fleet.

The aircraft can carry a total of 302 passengers, which is up 30 from the airline’s previous B787 models.

When Royal Air Maroc first received its older B787-8 aircraft, it was saving 20% fuel and emissions.

Now the airline can fly more people further in addition.

The cabin has been updated with the latest features and amenities including larger overhead bins and windows, dimmable shades, higher ceilings, lower cabin pressure, personal ventilation air vents above each seat, Audio Video on Demand with large touch screen LCD’s and LED mood lighting throughout the aircraft.

The 26 business-class seats are divided into seven rows (one row doesn’t have window seats) in a 1-2-1 configuration.

This means every seat has direct aisle access and avoids the awkwardness and hassle of having to hop over a seatmate.

This is a great business-class configuration.

The way the seats are designed makes each seat — and especially those at the windows — very private so there’s no need to be ashamed of whatever reality television show or corny movie you’re watching.

f you’re flying with a companion, you can choose the pair of middle seats, which offer just as much space and privacy and also allow you to chat — there’s a partition that can be extended if you need alone time, though, or if your seat neighbor is a stranger.

Inside one of the storage units was the IFE controller, headphone jack, two USB outlets and an AC power outlet.

The business cabin had two lavatories reserved for passengers.

The Royal Air Maroc new B787-9 Dreamliner aircraft will have a 3-3-3 layout in the new economy cabin.