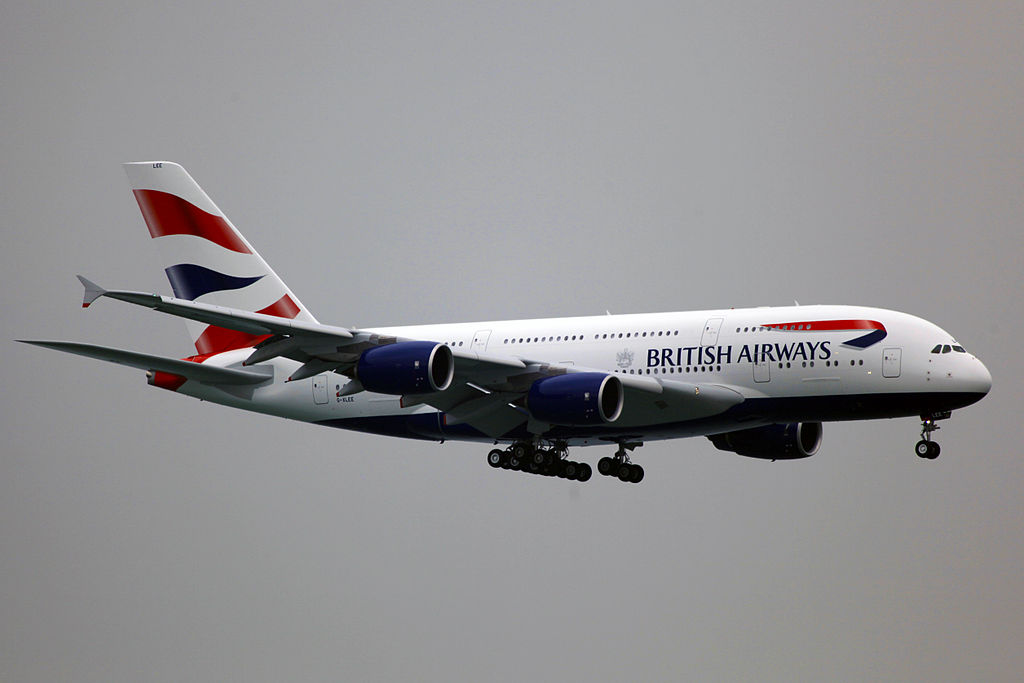 The Airbus A380 is a double-deck, wide-body, four-engine jet manufactured by Airbus Industrie, the European consortium.

It is the world’s largest commercial passenger aircraft and the upper deck extends along the entire length of the fuselage.

It is also one of the greenest, with lower community noise and emissions per passenger than the Boeing 747-400 despite having almost 50% more floor space and 60% more headroom.

Carbon fibre, a strong and light material, is used on key parts of the A380.

Roughly 25% of the plane’s overall structure is made from carbon-fibre reinforced plastic.

The A380 will replace some of BA’s Boeing 747-400 planes that are being retired and fly on high demand long-haul routes such as London to Los Angeles and Hong Kong.

The plane comes equipped with on-demand audio and video systems for all seats.

All A and K seats in Economy may have slightly restricted legroom and limited underseat storage space due to the presence of an electronic equipment box.

First class of the Airbus A380 operated by British Airways has 14 seats that have 180 degrees recline.

Business class (Club World) includes 97 seats: 44 of them are located on the lower deck and 53 on the upper deck.

The seats 10B, 10D, 10G and 10J are located close to the galleys and this fact may cause inconvenience to passengers of these seats as well as the light that comes from the galleys that may disturb passengers on overnight flights.

Close location of the the seats of 15th row to lavatories may be bothersome.

The seats A and K in all rows of Economy class may have restricted legroom and less underseat space as electronic equipment box is stored here.

The seats 20A and 20K have less legroom because of the exit door that protrudes here.

The windows in this row may be misaligned.

Among other disadvantages of these seats are: reduced seat width, close location to lavatories and it may also get cold from the exits during the flight.

Passengers of the seats 20BC and 20HJ will take advantage of extra space for their legs.

However, as the tray tables and TV are in the armrests, the width of these seats is slightly reduced.

Also proximity of the lavatories may be bothersome as other passengers tend to gather here.

For passengers who are travelling with infants will be comfortable seats 20DEFG as these seats have bassinet location.

These seats have restricted legroom because of the bulkhead location.

As tray tables and TV are in the armrests they width of these seats is reduced.

Proximity to the lavatories is another disadvantage.

As there is no seat behind the seat 23D other passengers and crew members tend to bump into it.

The seat 25D is considered a good seat as passenger of this seat will take advantage of extra legroom because there is no seat in front.

The main disadvantage of the seats from 31st row is their close location to the galleys and bar from which passengers can here noise, see light when having rest during overnight flights and because of constant moving of crew members in this area.

The seats of the 35th row have a little less legroom because of the bulkhead position.

The tray tables are in the armrests making it immovable and reducing the seat width.

The seats from this row are often given to passengers with babies.

Proximity to the lavatories may be bothersome for passengers of the 42nd row.

The seats 42ABC and 42HJK are considered bad seats as they may be less reclining than other standard seats.

The seats 50A and 50K are seats with missing windows.

Proximity of the lavatories may be bothersome for passengers of the seats 50B and 50J.

Other passengers tend to bump into these seats when passing by.

The only disadvantage of the seats 56F, 56J and 56K is their close location to the lavatory.

This part of the airplane has 55 seats in Premium Economy class (World Traveller Plus).

The best seats in this section are the three seats of the 60th row and the seats 61aB and 61JK.

Passengers of these seats will feel comfortable here thanks to the extra legroom.

However the width of these seats is reduced a little as the tray tables are in the armrests making them immovable.

Close location of the lavatories is the only disadvantage of the seats 67AB and 67JK.

The seats of the 68th row are considered bad seats as they may have limited recline and are located close to the lavatories.

The seats 70A and 70K are bad seats as it has the following disadvantages: restricted legroom because of the exit door protrusion, reduced seat width, missing window and proximity of the lavatories.

The seats 70B and 70J are considered good seats as they have extra legroom.

However, the width of these seats is reduced and other passengers tend to gather here to use the lavatories.

The seats 70DEFG have the same peculiarities as seats 70B and 70J.

These seats are often given to passengers travelling with babies.

The main disadvantages of the seats of 78th row is proximity of the lavatories and limited recline as a wall is located behind.

The seats 80A and 80K are seats with missing windows.

As the tray tables are in the armrests, the armrests are immovable and the width of these seats is reduced.

The other seats of the 80th row have extra legroom, however, the width of these seats is also reduced.

The seats 80DEFG have also another disadvantage – other passengers tend to gather near these seats to use lavatories.

The only disadvantage of the seats of the last 83rd row is proximity of the galleys which may be bothersome.

Where does British Airways Airbus A380-800 fly?

To help plan your trip, discover insider tips and find the inspiration to make your journey even more memorable, why not take a look at the destination guides for the Airbus A380 routes.

Thanks to visiting AirlinesFleet.com and read article : British Airways Fleet Airbus A380-800 Details and Pictures.