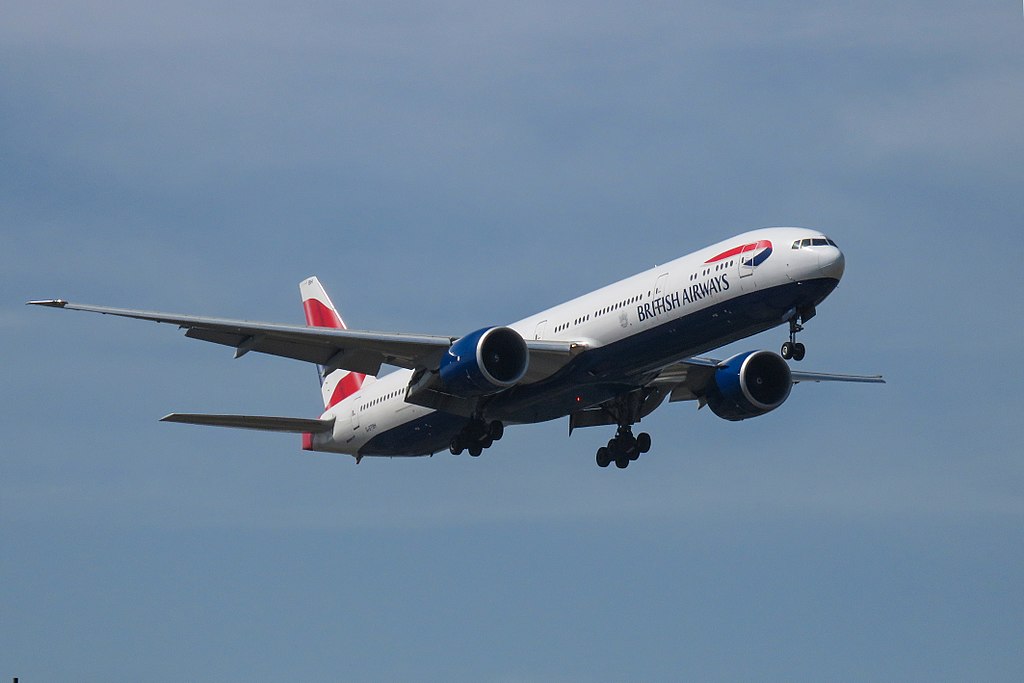 British Airways operate these on routes to Asia and North America.

British Airways took part in the design of the aircraft with Boeing, and is today one of the world’s largest operator of the type.

The Boeing 777 has emerged as a best seller for longhaul commercial aircraft thanks to its excellent fuel efficiency and cabin comfort.

This Boeing 777-300ER aircraft is configured with four classes and features all of the airline’s newest inflight products.

Currently it operates routes to India  and the Middle East.

British Airway’s new Premium Economy is featured with an enhanced seat and a larger personal television.

World Traveller features a new slimmer seat, with a hard back.

Power, USB, and RCA connectivity is available in all classes.

First class of this airplane has 14 open suites.

All of them are standard.

The only disadvantage of the seats 1E and 1F is proximity of the galleys.

The seats 4A and 4K are also located close to the galleys and lavatories but they have such an advantage as unique window blind system that covers two windows making the feel of private jet.

Club World class has 56 flat bed seats located in 7 rows per 8 seats in the row.

The seats 10A and 10K have misaligned windows.

Proximity of the galleys may be bothersome for passengers of the seats 10BDEFGJ.

The seats of the 16th row have such a disadvantage as proximity of the lavatories as other passengers tend to gather here to visit them.

The seats of the 21st row have extra legroom.

These seats are often given to passengers with infants as they have bassinet location.

Among disadvantages: lack of floor storage during takeoff and landing, reduced width of the seats as the tray tables are built-in the armrests.

The seats 22A and 22K have extra legroom due to the exit row located in front.

However, these seats are missing windows, have reduced width, have no floor storage during takeoff and landing.

Other passengers report that it gets cold by the exits during the flight.

The best seats in this section are the seats 22B and 22J.

Passengers of these seats will feel comfortable here thanks to extra space for their legs.

At the same time there is no floor storage for these seats during takeoff and landing and the width of these seats is reduced.

The seats of these class are divided into two sections.

The seats of the 28th row are narrower than standard as the tray tables are in the armrests making them immovable.

These seats have no floor storage during takeoff and landing, position of the bassinets here may cause inconvenience.

The best seats in this section are the seats 29C and 29H.

Passengers of these seats will take advantage of extra legroom.

The only insignificant disadvantage of these seats is lack of floor storage.

The only disadvantage of the seats 33ABC, 34 DEF, and of the seats of 35th row is their close location to the lavatories.

The seats 37A and 37K have extra space for passengers legs but protrusion of the exit door may be a problem as well as close location of the lavatory.

These seats have no windows.

These seats are narrower than standard and have no floor storage during takeoff and landing.

The seats 37BC and 37HJ have extra legroom.

Other passengers tend to gather here to visit lavatories and this may be a problem.

The tray tables are in the armrests making them immovable and reducing the width of the seats.

These seats have no floor storage during take-off and landing.

The seats 37DEF have the same disadvantages as the seats 37BC and 37HJ plus restricted legroom.

The seats 48C and 48H are standard but other passengers to bump into them as there are no seats behind.

These seats have movable armrests.

Passengers who are travelling with partners will feel comfortable on seats 49AB and 50AB.

The seats 49DEF have movable armrests as well but have limited recline and are located close to the galley and lavatory.

The seats of the last 50th row have limited recline.

Proximity of the galley and lavatory may be bothersome.

The seats 50J and 50K are often reserved for crew members.

The aircraft operates on a variety of routes, including: