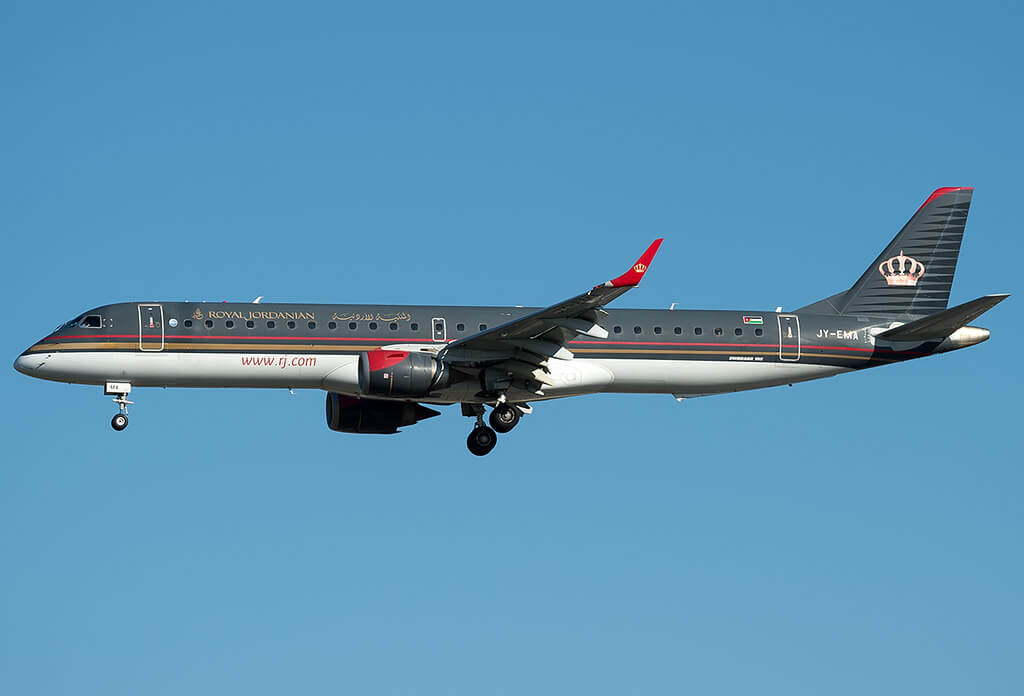 The aircraft will be deployed on routes to the Middle East, Africa and into Europe.

The Embraer 195 is a Brazilian-made, narrow-body aircraft serving routes within the Levant.

On short flights, both Crown and Economy class passengers will discover a welcoming and relaxed atmosphere in addition to comfortable seating and an outstanding range of services and amenities.

The first Arab airline invited to join the Oneworld alliance, Royal Jordanian is the launch customer in the Middle East for the Embraer 195.

The Embraer ERJ-195 configured to carry 100 passengers in a two-class layout, with 12 seats in Crown Class (Business) and 88 seats in Economy Class, with a pitch of 42” and 33”, respectively.

Both Crown (Business Class) and Economy Class seats layout and configuration are similar with the Embraer ERJ-175. 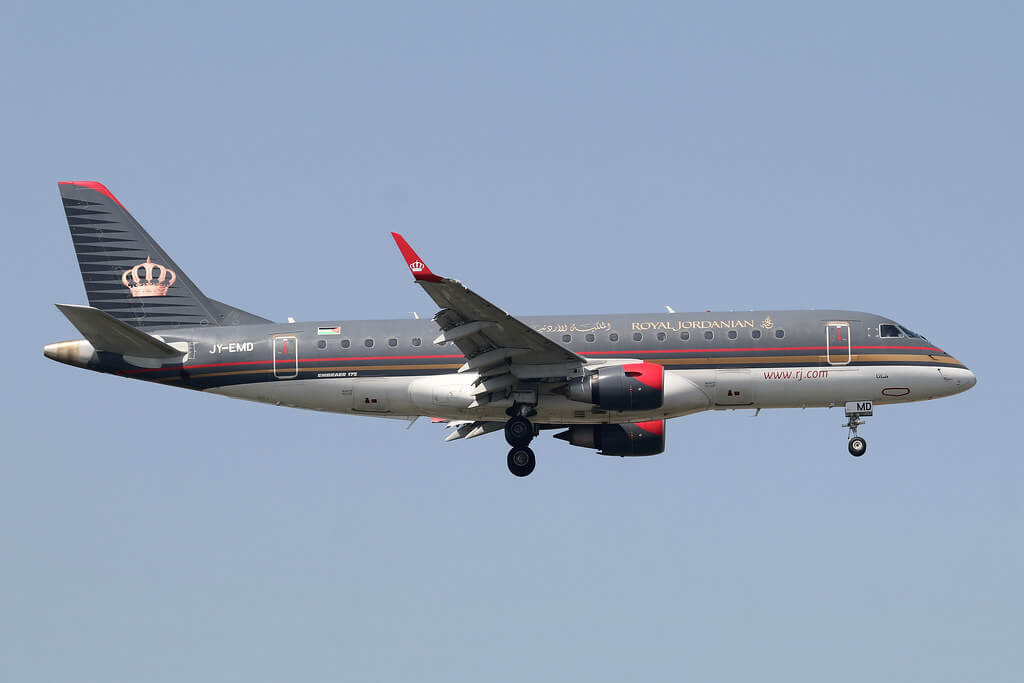 The Embraer 175, a twin engine, single-aisle, narrow-body aircraft, offers passengers on short flights within the Levant an exceptional level of service and comfort, complimented by the warm smiles and gracious hospitality of Royal Jordanian onboard staff.

By selecting the Embraer ERJ-175, Royal Jordanian will become the first operator in the Middle East to fly this aircraft in regular scheduled service.

While the Embraer 175 is a comfortable regional jet in general, this configuration has to be the most comfortable yet, as the seats even have legrests and power ports.

The legroom was quite good, and the seat even had a legrest.

There was also a power port on the side of the seat. 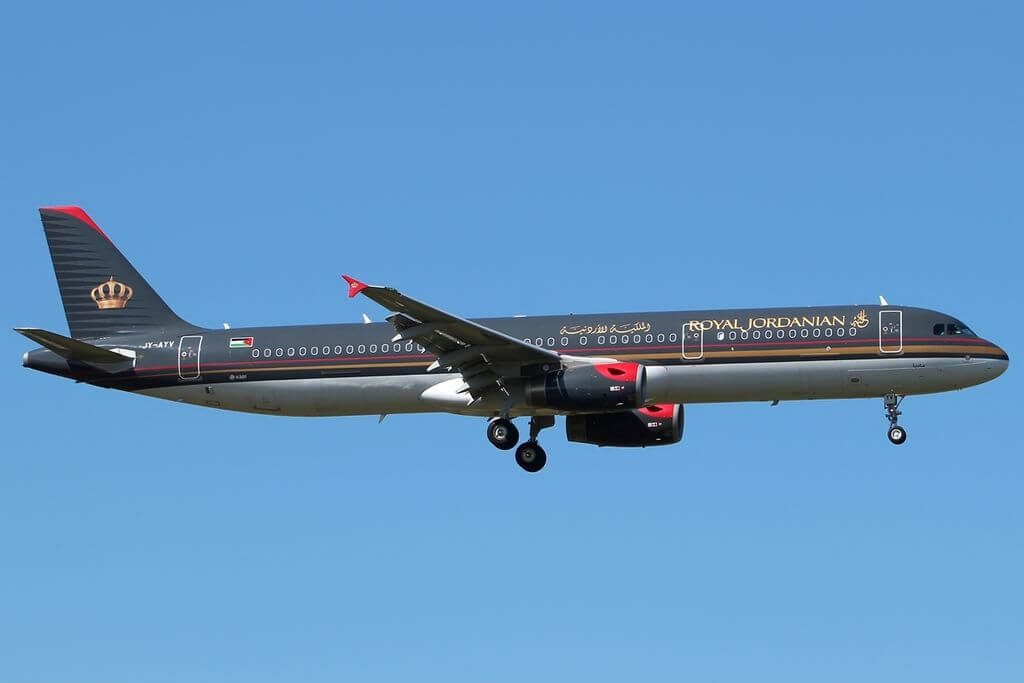 The A320 Family’s longest-fuselage member, the A321, offers the best seat-mile costs of any single-aisle aircraft – with passenger capacities comparable to that of a wide-body jetliner.

This stretched-fuselage aircraft has an overall length of 44.51 metres, providing ample room to comfortably accommodate between 170 and 200 travellers – or up to 220 in a high-density layout.

Royal Jordanian flies their version of Airbus A321-200 in a two class configuration with 20 Business Class recliner seats and 147 standard Economy Class seats.

The Crown (Business Class) cabin was five rows of 2-2 configuration.

Seats were comfortable and plenty of leg room, although the leg rest which comes out is useless if you are tall.

There was decent recline, but it was very much a cradle seat, and not anywhere near being fully flat or angled lie-flat business class product.

All economy and J class seats are equipped with personal touch screens, making it easier and more comfortable for each passenger to watch his/her favorite programs and play the system games.

Thanks to visiting AirlinesFleet.com and read article : Royal Jordanian Fleet Airbus A321-200 Details and Pictures.

The Airbus A320-200 is Royal Jordanian aircraft of choice for destinations in the Middle East and Europe.

The business-class (Crown) cabin had 16 seats arranged in a 2-2 layout.

The economy cabin had 120 seats arranged in a 3-3 layout.

Economy seats had a pitch of 32 inches and width of 17.7 inches.

Each business-class seat had its own USB power port and universal power outlet.

There was a controller for the IFE system in business and even the economy seats had their own screens.

The seat recline controls were built into the armrest.

Full recline included a leg rest and was comfy and decent enough for a short-haul A320 business-class product.

There is no overhead bin storage for rows 1 or 2 on the starboard side (seats A and B).

Thanks to visiting AirlinesFleet.com and read article : Royal Jordanian Fleet Airbus A320-200 Details and Pictures. 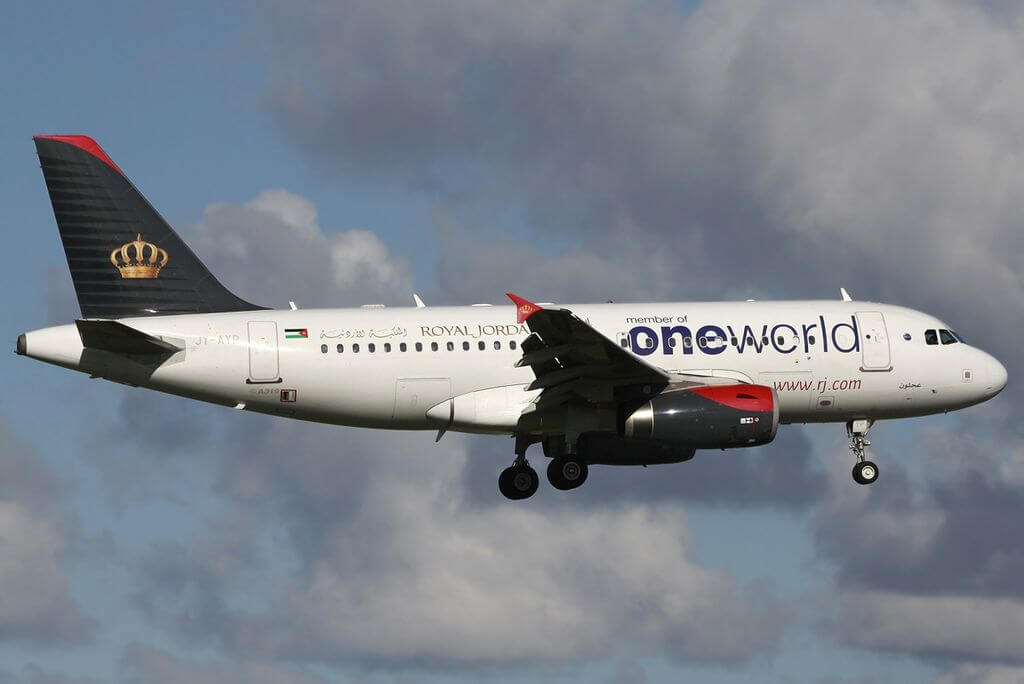 The Airbus A319, a large, narrow-body, single-aisle aircraft, exceeds Royal Jordanian passengers’ expectations for comfort and service on short and medium-length flights within the Levant and to Europe.

Even on short trips, all passengers are treated to a full range of amenities, and seating designed to ensure an enjoyable flight.

The A319 has the same optimised cabin cross-section as its fellow A320 Family members (A318, A320 and A321) – which is the widest single-aisle fuselage on the market.

The economy cabin has three seats on each side.

The business (crown) cabin aboard the Royal Jordanian A319 features extremely large and plush recliners in a 2-2 configuration.

Each seat featured a personal reading light, foot rest, and had 2 points of movement.

The IFE was a flip-out stored in the armrest and was very dated.

While not lie-flat, the generous padding was still comfortable enough nap in.

The cabin was kept at a cool temperature and each seat had an individual air vent.

While the seats are not fully lie-flat they are certainly better than what European carrier will have with 3-3 and a blocker middle seat.

Thanks to visiting AirlinesFleet.com and read article : Royal Jordanian Fleet Airbus A319-100 Details and Pictures.