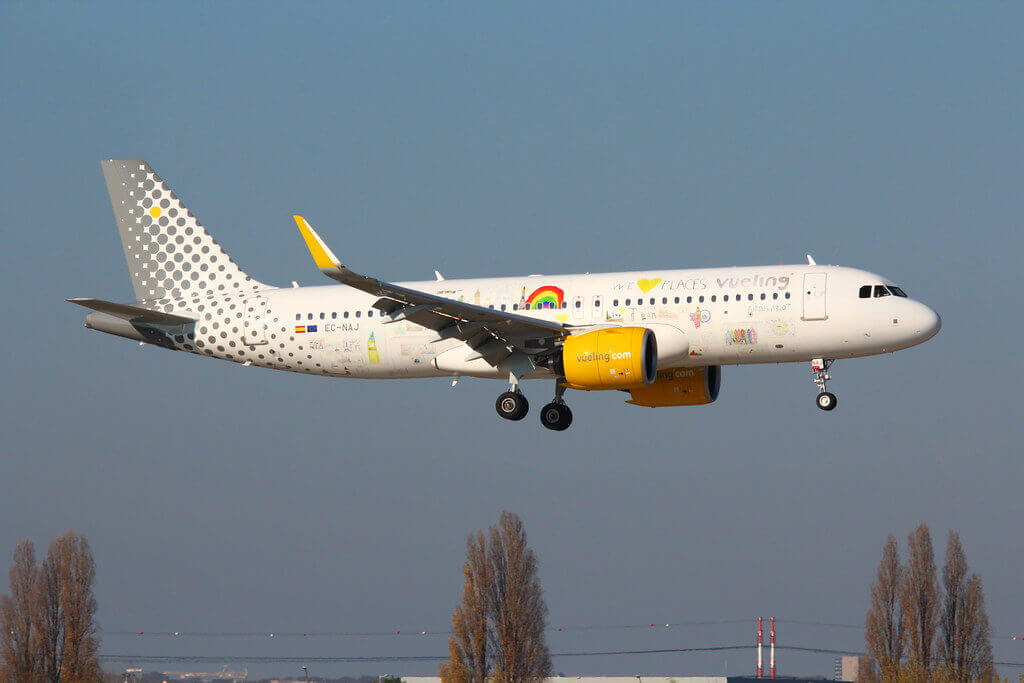 This machine is only flying to CDG, ORY and MUC for now.

The aircraft can be easily compared to a normal A320 due to the bigger engines that it has.

Vueling Airlines decided to use the Pratt & Whittney PW1000G.

The brand new airbus will be used to reduce the fuel burn between 10-15% less, reduce the noise up to 75% (as you can hear in the video is very silent), and flying longer than a normal airbus.

This A320neo also incorporates the Recaro SL3510 seats that Iberia Express and Iberia already use in their A320.

They are seats “Slim”, that is to say thinner, that offer 5 cm more space for the knees with the same separation between seats.

These seats are already present in several of the A320 that Vueling has been receiving in recent months, and will gradually replace the seats of the rest of the fleet.

In July 2017 Vueling had decided to install these seats in 72 aircraft for an amount of 21 million euros in addition to the planes that would arrive from the assembly line.

According to Vueling data, at the end of 2018, 98 of the 113 aircraft in the fleet will already have these seats.

Although the 180 seats installed are the same, Vueling has upholstered them in several colors to differentiate those sold with more space.

Until now, Vueling sold the first four rows as Priority.

Now, row 1 has become Space One, a kind of business although in Vueling they don’t want to define it like that, with 20 percent more legroom than standard seats.

The next three rows are now called Space Plus and offer 10 percent more space.

And then the rows of the emergency exits have become Space, with 20 percent more space (the standard in these rows to facilitate the departure of the plane).

Space is sold at an average price of 12 euros, all on the Basic rate.

Vueling is installing USB sockets for recharging mobile devices in all seats.

Vueling is installing USB sockets for recharging mobile devices in all seats.