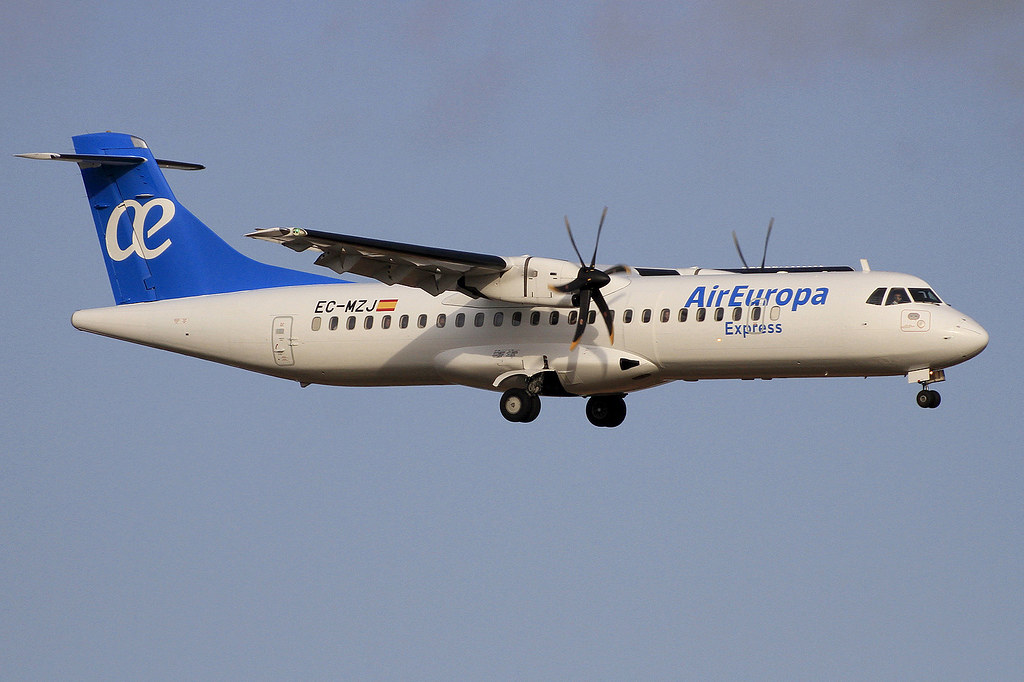 The number “72” in its name is derived from the aircraft’s standard seating configuration in a passenger-carrying configuration, which could seat 72–78 passengers in a single-class arrangement.

First version of the ATR 72 Air Europa with 2 classes (business and economy) and 68 seats on board.

Second version of the ATR 72 Air Europa with single economy class and 68 seats on board. 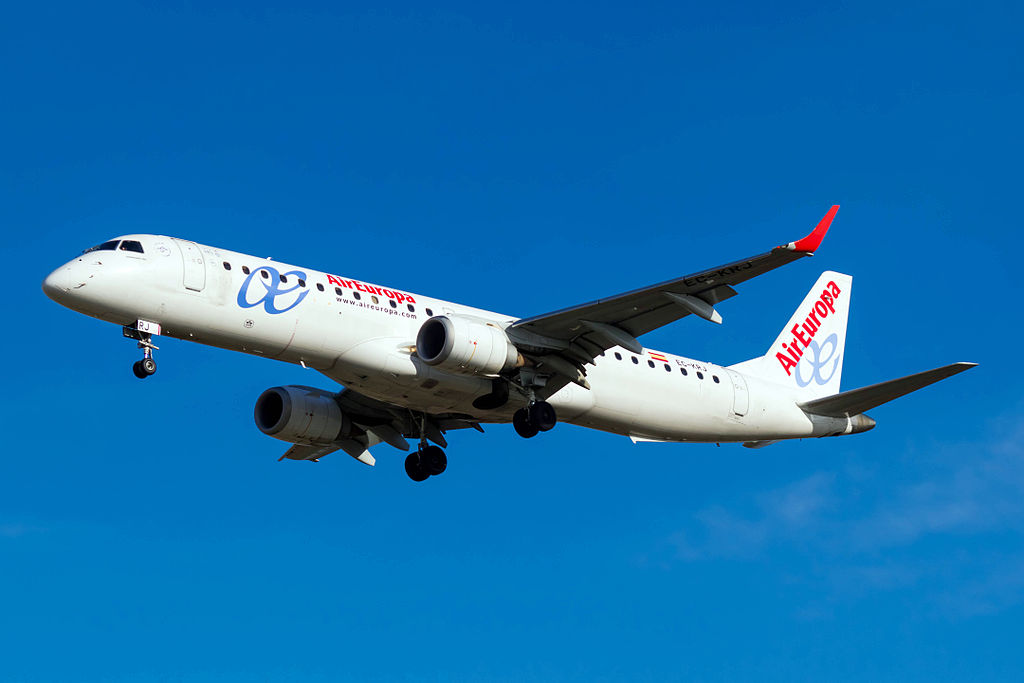 A state-of-the-art aircraft with a two by two seat configuration, with a wide and comfortable central aisle.

It is perfect for short and medium-range distances, with an autonomy of 3,500 kilometres.

Whilst it is the smallest aircraft in our fleet, it is also the largest model offered by the Brazilian manufacturer Embraer.

It has been configured to seat 120 passengers, and the eleven aircraft that we operate cover domestic and European routes.

The aircraft is operated by a company called Aeronova on behalf of Air Europa under the Air Europa Express brand.

Air Europa flies the Embraer 195 with 122 seats in a two-class configuration of Business and Economy.

Business Class can range from 10-14 seats, depending on flight.

The Bulkhead between Business and Economy is a curtain that moves to change configuration.

Business Class seating is the same as in Economy Class, so the seat next to you is not kept empty.

There are three rows in Business Class with a total of twelve seats. 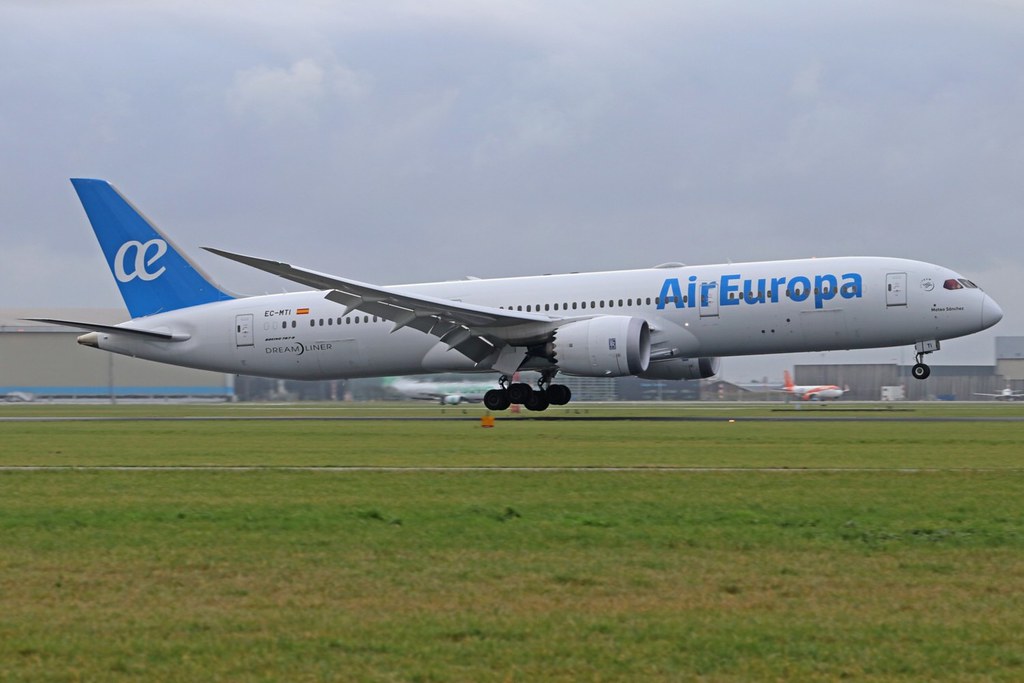 This aircraft is stretched version of Boeing 787-8 Dreamliner with larger capacity.

Boeing 787-9 Dreamliner has bigger windows of 46 centimeters height that is 30% more than the major part of airplanes of similar dimensions.

The windows are equipped with regulated electro-chromic blanking – their brightness is regulated with buttons.

Ragged edges of the engines’ pods reduce the noise level by 60 % both inside and outside the cabin.

On the backs of the seats are located displays on which are shown entertainment programs.

Passengers may use Internet.

Air Europa flies the Boeing 787-8 Dreamliner with 333 seats in a two-class configuration of 30 Business and 303 Economy.

All the seats have an audiovisual entertainment touch screen and a USB port.

They have a 2-2-2 layout, and it’s similar to the seats Royal Air Maroc has on their 787-8s, where seats are angled towards one another in a rather odd way.

Air Europa has announced a huge upgrade to their business class product, as the airline will be introducing business class cabins with direct aisle access from every seat on newly delivered 787-9s. 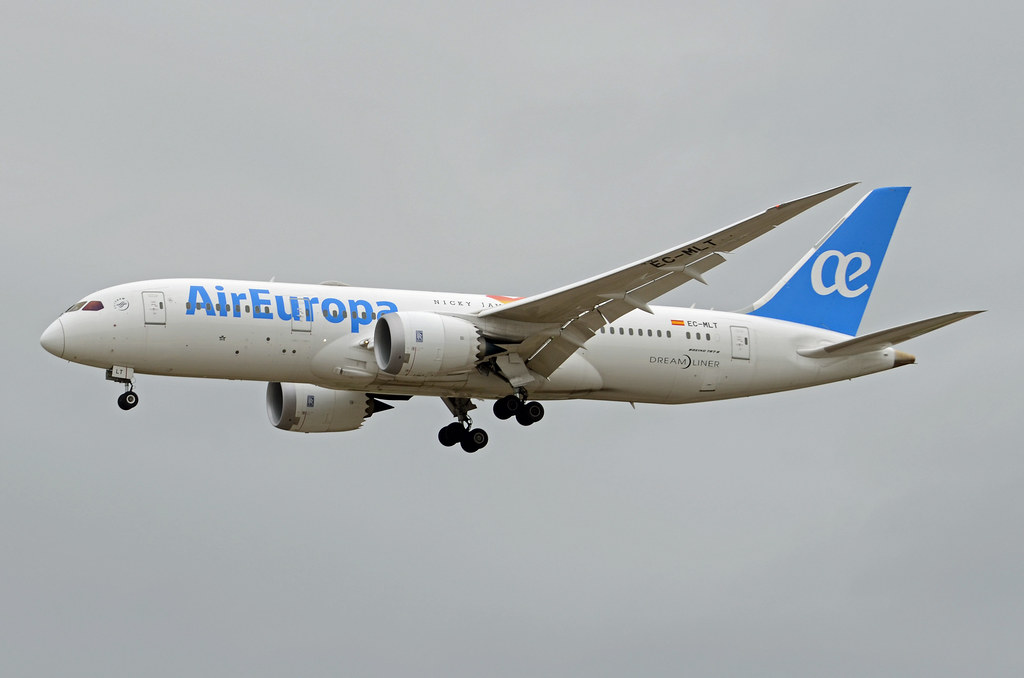 The 296 passengers (22 in business class) will thus enjoy a comfortable in-flight experience.

Air Europa flies the Boeing 787-8 Dreamliner with 298 seats in a two-class configuration of Business and Economy.

Air Europa has a total of 22 business class seats on the 787-8, all located between the first and second set of doors.

There are a total of four rows of seats in a 2-2-2 configuration, though in the last row there aren’t two seats in the center.

Each seat faced slightly inward, so passengers were oriented toward each other.

It was basically the same seat that Royal Air Maroc chose to use on its 788s, though the seats on RAM are staggered in the sense that one seat is higher than the other within the same pod, and Air Europa’s were on the same level.

Each seat is a tight 17 inches wide, and legroom is an equally tight 31 inches.

Seat width in coach is pretty much standard across all operators of the 787, but legroom, also known as seat pitch, is very much the decision of each individual airline.

There are 4 rows of seats in the business class: 3 of them have 3-3-3 configuration and one row has 2-2 configuration.

The noise from the lavatories and galleys located in front and lack of floor storage during take-off and landing are the main disadvantages of the seats of the 1st row.

The galleys are also the disadvantage of the seats 3DG and 4C, 4H.

Economy class is divided from the seats of business class with an exit row.

Economy class may accommodate 276 passengers. These seats are divided into two sections.

The seats of the 15th row are considered good seats because they offer extra legroom to passengers.

Another disadvantage of the seats 15C, 15DFG and 15H is proximity of the lavatory.

Air Europa designates the seats 15DFG as XL Economy class seats to book which extra fee must be paid.

Second section of economy class seats is located behind another exit row.

Thanks to this exit row passengers of the seats of the 40th row will feel comfortable because these seats provide additional space for their legs.

However, reduced width, no floor storage during take-off and landing and location of the lavatories in front may be bothersome.

An extra fee must be paid to book the seats 40DFG because these seats are designated as XL seats.

The main disadvantage of the seats 47A and 47K are missing windows.

As there are no seats behind the seats 49C and 49H are often bumped by other passengers and crew members passing by.

Lavatories located behind are the only disadvantage of the seats 50D and 50G.

Limited recline and noise from the galleys and lavatories located behind make the seats 50AC, 50HK and 51DFG bad seats. 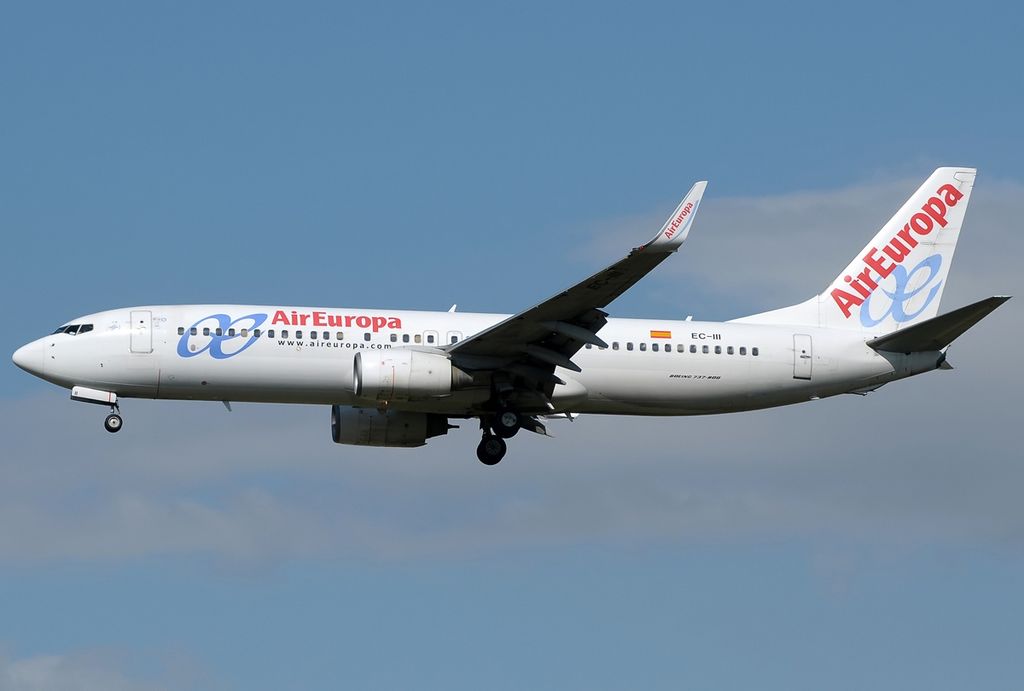 It is one of the latest models of the ‘737’ range and offers maximum reliability.

Its reactors are the most in demand in the history of the aviation sector.

Air Europa flies the Boeing 737-800 with 180 seats in a two-class configuration of Business and Economy.

The seats of the first 3 rows contain 12 seats of business class.

The middle seats in these rows are blocked providing additional personal space for passengers of business class.

The seats of the 1st row are considered the best seats because they have extra legroom.

However, these seats have no floor storage during take-off and landing.

All the seats in the economy class have 3-3 configuration.

Passengers of the seats of the 4th row will take advantage of additional space for their legs.

Among disadvantages of these seats: reduced width because of immovable armrests and lack of floor storage during take-off and landing.

The only disadvantage of the seats 11A and 11F are misaligned windows.

Due to the exit row located behind the seats of the 14th row may not recline.

Behind the exit row the second section of economy class seats is located.

The seats of the 15th row are considered the best seats because they offer additional legroom.

However, as the tray tables are in the armrests the width of these seats is slightly reduced.

Limited recline and legroom and location of the galley and lavatory behind make the seats of the last 31st row bad seats. 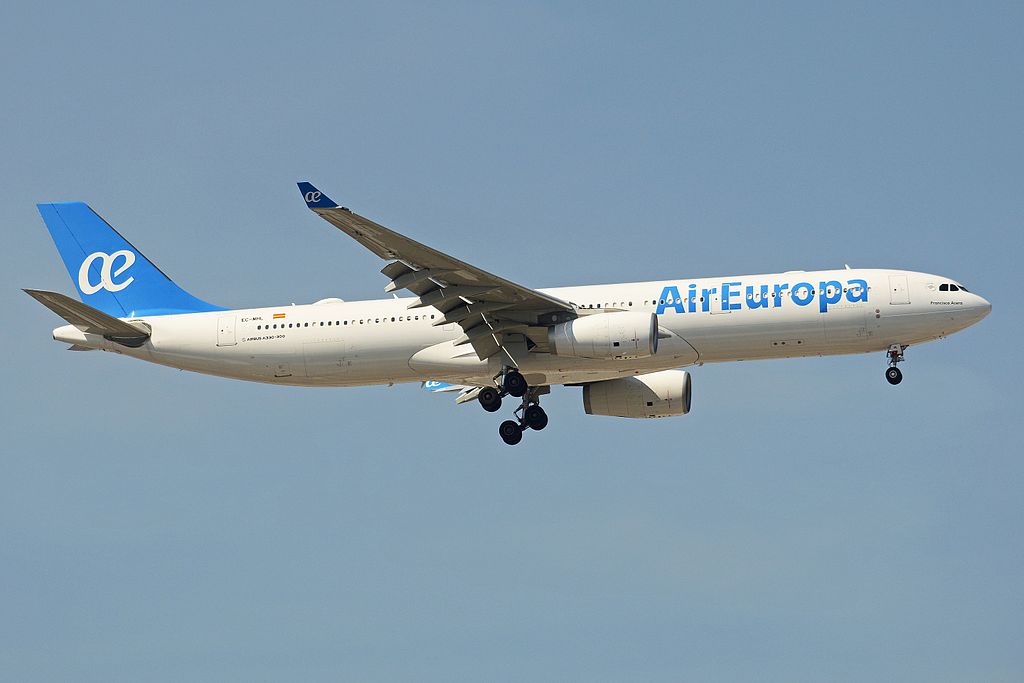 The aircraft is on lease from aviation lessor AWAS.

The Spanish charter and scheduled service airline will use the aircraft on transatlantic flights to destinations covering Europe, Western Africa and the Americas.

The carrier recently launched a new long-haul route from Madrid to Montevideo, Uruguay.

The airline also runs three flights a week from London Gatwick via Madrid.

The A330-300 has the versatility to cover all ranges – from short-haul to true long-haul – while accommodating between 250 and 290 passengers in a comfortable, quiet cabin with a typical three-class layout.

Thanks to visiting AirlinesFleet.com and read article : Air Europa Fleet Airbus A330-300 Details and Pictures.