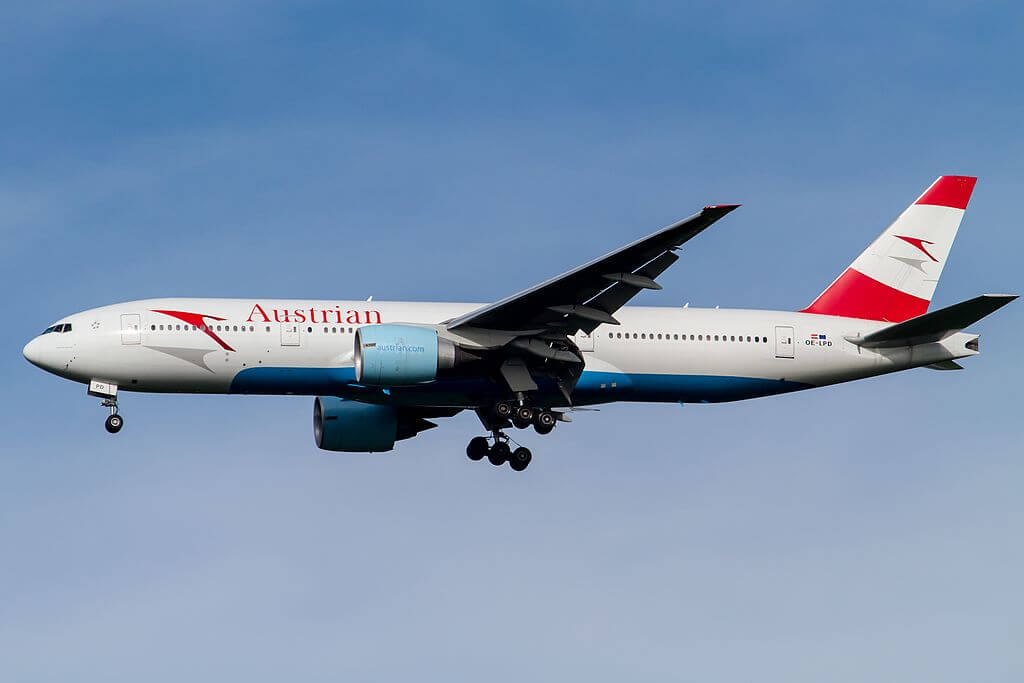 It is deployed by Austrian Airlines on flights to Bangkok, Chicago, Hong Kong and Shanghai, and is also used in the summer months on flights to Los Angeles, Tokyo and Beijing as well as to Mauritius, Colombo, New York (JFK and EWR) in the winter season, and also to Cape Town starting on October 27, 2018.

A large Business Class cabin with 32 seats (in seven rows) is located behind the cockpit.

While a smaller and more intimate Business Class cabin with only 16 seats (in three rows) is located in front of the Economy Class cabin.

Both Business Class cabins are divided by the main boarding door, a galley and two lavatories.

The Business Class seats are placed in a staggered configuration, a so-called Sogerma Solstys layout, whereby the foot compartment for each seat is located between and under the seats in front.

The seats enjoy a high degree of privacy (albeit not complete), as none of the rows quite line up, so nobody is directly looking into the seat across the aisle.

Most seats also have direct aisle access, except for the paired window seats, where the passenger seated along the window will have to climb over his/her neighbour’s legs to reach the aisle.

It definitely looks much fresher and feels more luxurious as compared to the design aboard its Lufthansa Group sister company Swiss, which uses the same layout.

All seats have at least one large work surface on the side (where you can set up your laptop), with all single seats and some paired seats featuring this work space on both sides (a so-called ‘throne seat’).

One side of the seat features a power port with international adapters, a personal reading lamp (at eye level), and a standard wired handset located below a flap in the arm rest.

The other arm rest holds the seat controls to adjust the seat position (from take-off position to fully flat) and firmness of the cushion (which includes a massage function), as well as the fold-out meal tray (which is hard to get out). In front of the seat, there’s a large, high quality entertainment screen (more on that below) and a foot compartment.

The seat is comfortable when you are sitting upright, but it’s a somewhat different story in its lie-flat position.

Although it’s a 180 degree recline, the seat and your lower legs descend into a space carved out for it in the seat(s) in front, below the entertainment screen.

This foot compartment is quite narrow, making it hard to switch position during your sleep while not waking up, as your legs will constantly hit the walls (although the seats that do not have the ‘throne’ feature have a little more space for the feet, hence making for a more comfortable sleep).

In addition, in its lie flat position, the seat is just 45 cm (17 inch) above the floor, making it feel like you are resting on the ground or in a coffin (because of the seat walls), and making it very uncomfortable getting in and out to go to the restroom.

On a positive note, Austrian Airways provides excellent blankets and very good pillows, which all greatly improve the sleeping comfort (and somewhat compensate for the not so good lie-flat seats). 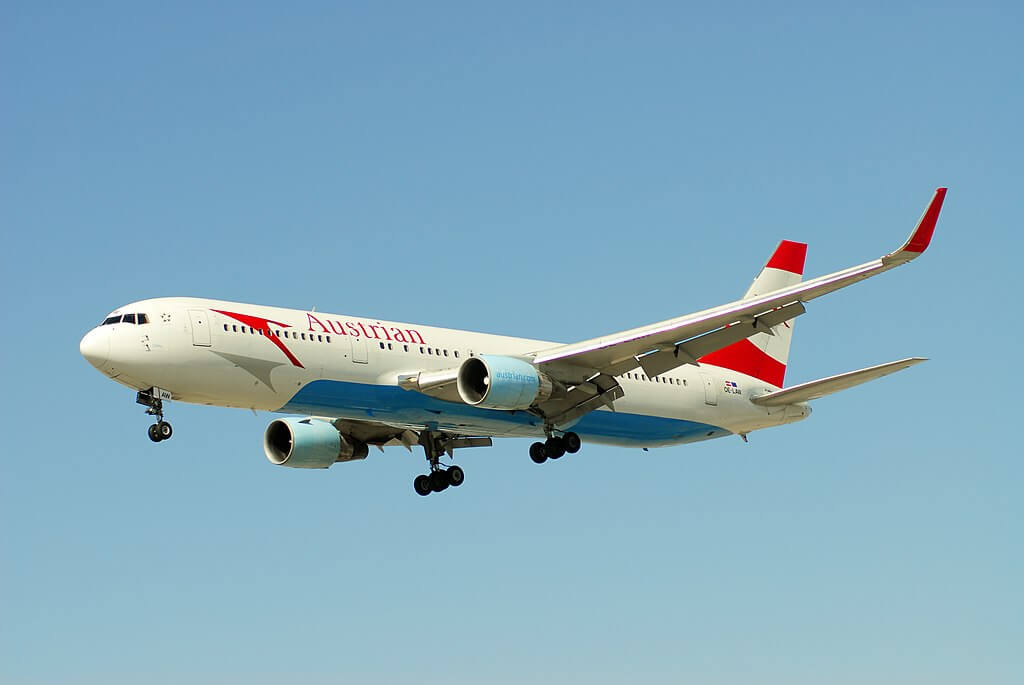 This aircraft configured with Business, Premium Economy, and Economy Class.

Business class seats are arranged in a staggered 1-2-1 pattern — due to the configuration, they measure only 20 inches between armrests, which is a little tight for a premium cabin.

When it comes to seat selection on the 767, there aren’t any clear winners and losers, but you should still take your preferences into consideration when selecting the best place to sit.

With the exception of 1A/K, those seats are going to have a narrow 10-inch-wide entrance, so they might not be suitable for passengers with limited mobility.

If you want a window-side seat with plenty of room to get in and out, you’re going to want to pick 1A or 1K.

The seats lie completely flat into an approximately 74-inch bed with a generous foot well.

The mechanics are quite quick, and adjusting the bed into your preferred position takes about 25 seconds.

The overhead light can be controlled via either the IFE remote or by the touchscreen.

There’s also an adjustable reading light for more focused light, as well as a “mood light” button, which lights up the seat-side storage cubby and foot well.

As far as storage goes, these seats aren’t the most generous, but there’s a surprising number of small pockets to hold your items.

The pouch under the in-flight entertainment screen could hold — but not really hide — my 11-inch laptop, for instance.

A water bottle holder next to the IFE screen could also double as a place to stash a phone or camera.

The small, 18-seat premium economy cabin lies just behind business class, and is laid out across three rows in a comfortable 2-2-2 configuration.

Austrian’s seats fit the bill: At 18.5 inches across, they’re nearly 2 inches wider than their economy counterparts.

The 6-inch armrest between each pair also added a comfortable amount of shoulder room. 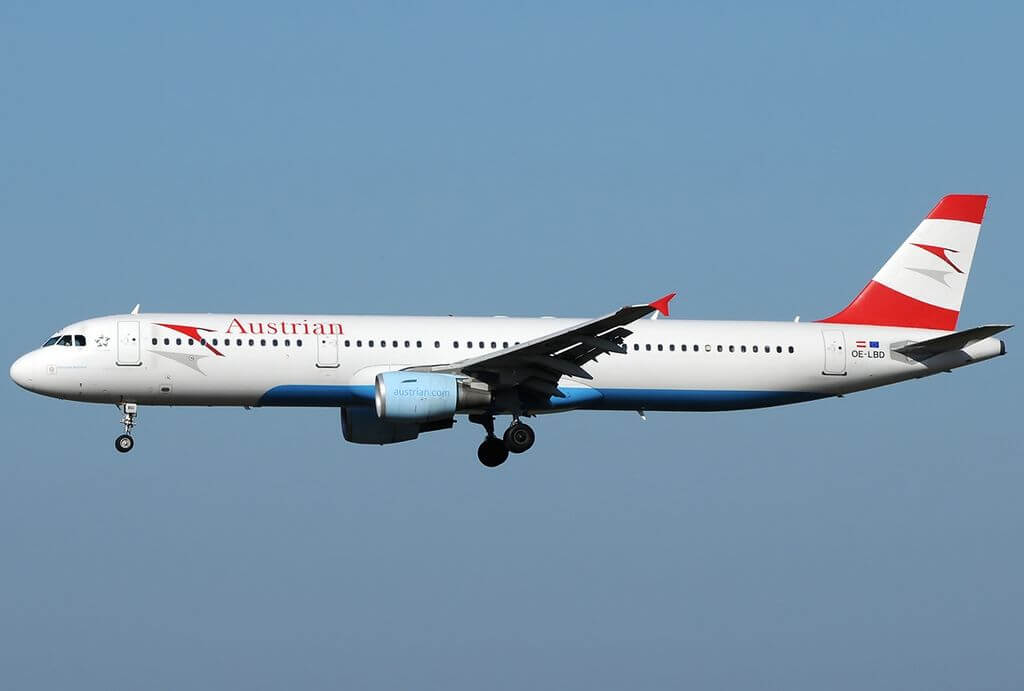 Austrian Airlines configured their A321’s with 200 seats (primary on single economy class, but on some occasion its convert to economy and business).

The original derivative of the A321, the A321-100, featured a reduction in range compared to the A320 as extra fuel tankage was not added to the initial design to compensate for the extra weight.

Airbus launched the heavier and longer range A321-200 development in 1995 which has a full-passenger transcontinental US range.

Austrian Airlines’ Airbus A321-111/211 (321) operates in a one class configuratuon with 200 Economy Class seats and is primarily used on short- and medium-haul flights.

Narrowbody aircraft Airbus A321 (321) Austrian Airlines has 1 classes on board with total of 200 seats.

Thanks to visiting AirlinesFleet.com and read article : Austrian Airlines Fleet Airbus A321 Details and Pictures. 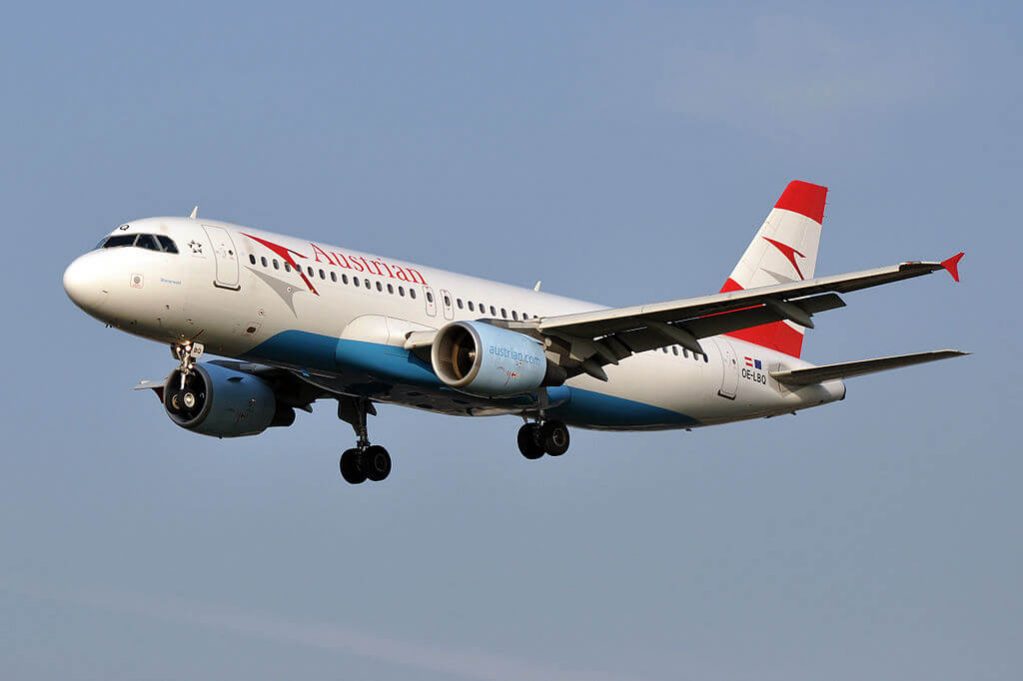 This aircraft shared similar configuration with Airbus A319-100 with 160 seats (business and economy class).

Austrian Airlines’ Airbus A320-214 (320) operates in a two class configuratuon with 28 Business Class seats and 132 Economy Class seats and is primarily used on short- and medium-haul flights.

Thanks to visiting AirlinesFleet.com and read article : Austrian Airlines Fleet Airbus A320-200 Details and Pictures. 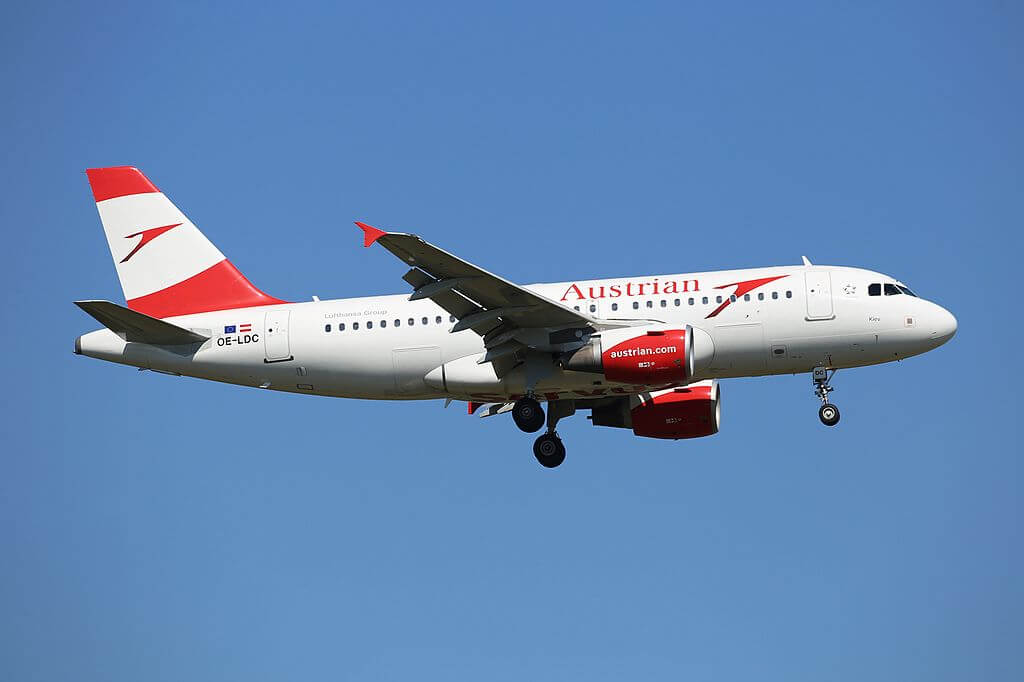 This aircraft configured with business and economy class cabin.

As a shortened-fuselage version of Airbus’ A320 cornerstone single-aisle jetliner, the A319 continues to prove its versatility by providing a range of seating options, from 110-seat configuration to a capacity of up to 160, with all options offering the highest level of passenger comfort.

The A319 has the same optimised cabin cross-section as the other A320 Family members – which is the widest single-aisle fuselage on the market and sets the standards for passenger cabins.

This aircraft is primarily used on short- and medium-haul flights.

Thanks to visiting AirlinesFleet.com and read article : Austrian Airlines Fleet Airbus A319-100 Details and Pictures. 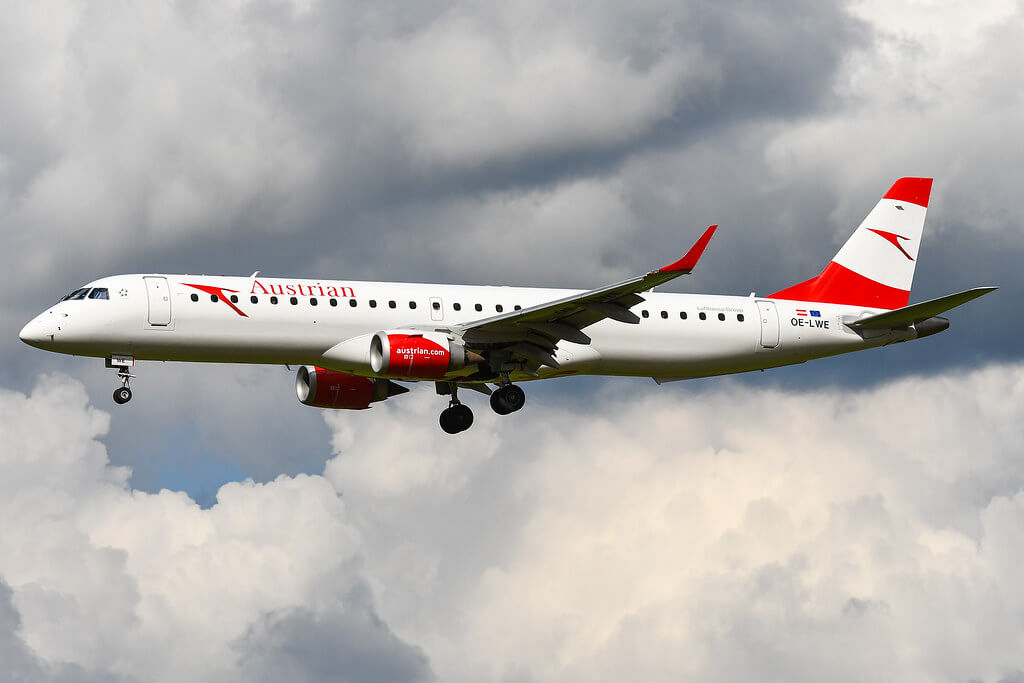 The E195, along with the other E-Jets in the family revolutionized the regional jet model, filling a gap in the market between regional and mainline aircraft.

The largest member of the E-Jet family, the E195 delivers even better economics than the E190, making it an ideal choice for low-cost operators.

Austrian Airlines flies the Embraer E-195 with 120 seats (Business and Economy Class seats) in a 2-2 configuration.

Austrian has black leather upholstered seats in a 2-2 configuration, which is standard in an Embraer jet.

Due to this arrangement, the seat next to you is blocked in Business Class, with the rest of the seat remaining the same as the one in the back.

No service during boarding and there are no bottled water on the seats either for passengers in the Business Class cabin, so that meant there was little to occupy premium guests except to look out of the window.

Narrow-body aircraft Embraer 195 (E95) Austrian Airlines has 2 classes on board with total of 120 seats.