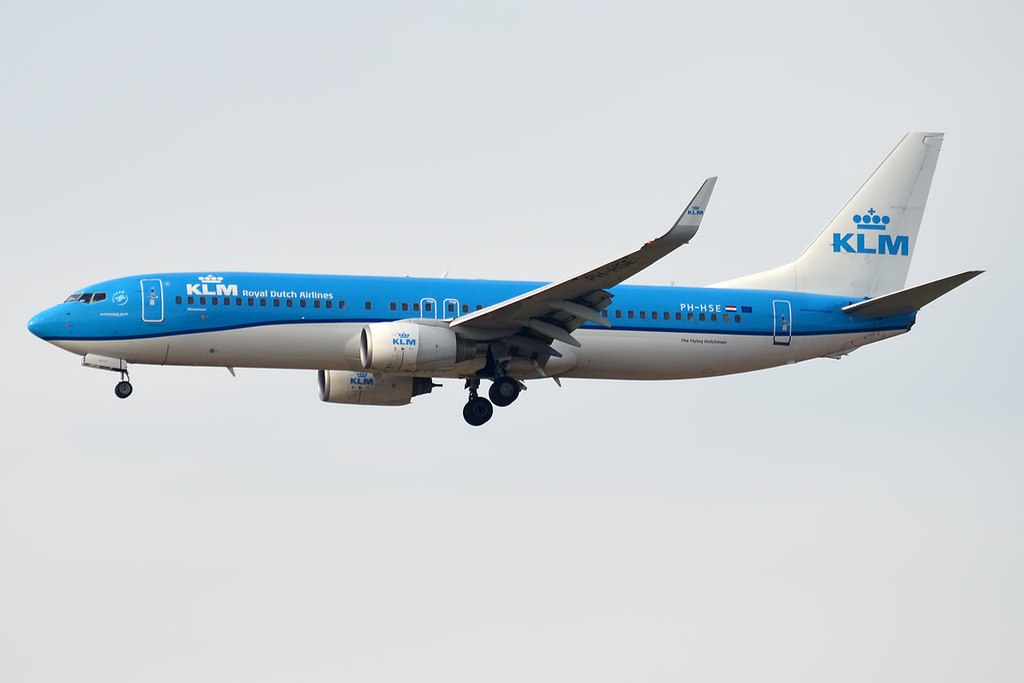 In two-class version the cabin may accommodate 162 passengers – 12 in the business class and 150 in the economy.

Maximal passenger capacity in one -class version is 189 passenger seats.

Later on some Boeing 737-800 airplanes with increased cargo capacity have been used engines CFM56-7B27s with 121.4 kN thrust.

As well as on other airplanes of “737 Next Generation” on Boeing 737-800 is installed digital avionics EFIS of American company “Honeywell”.

All on-board and flight data is displayed on six multi-functional LED screens.

Boeing 737-800 is also equipped with indicator on the windscreen or Head-Up Display (HUD).

Plus, you earn double Flying Blue Miles with every flight in a Europe Select seat.

But like most other European airlines, rather than having 5 rows of proper recliner seats, the entire plane is economy class but the 5 rows of business class just block the middle seat.

There’s also power ports at the seats in between seats underneath the armrest.

Business class offers 20 recliner seats that are located in first 5 rows of the airplane.

The middle seats, i.e. the seats B and E are not sold providing additional room for passengers of business class.

All the seats of business class are standard, only the seats of the 1st row have some peculiarities such as: location of the galleys in front, lack of floor storage during take-off and landing and reduced with as the tray tables are in the armrests making them immovable.

These seats are located in the 6th row.

The seats of the 6th row have extra seat pitch.

Economy class consists of 25 rows of seats that have 3-3 configuration.

There are totally 144 standard seats here.

Due to presence of entertainment equipment under the seats 8A, 10A and 10F the under seat storage and legroom are restricted.

Misaligned windows is disadvantage of the seats 9A and 10F.

The seats 9F and 10A have no windows at all.

Because of the exit row located behind the seats of the 14th row do not recline.

Location of the seats of the 15th row between two exit rows on the one hand provides these seats with extra legroom (these seats are designated as preferred seats to reserve which an additional charge should be paid).

At the same time these seats are less reclining than standard, have no floor storage during take-off and landing are narrower because the tray tables are in the armrests making them immovable.

Passengers of the seats of the 16th row will feel comfortable thanks to extra space for their legs.

These seats are considered preferred seats for which an additional fee is charged.

However, these width of these seats is reduced a little and there is no floor storage for these seats during take-off and landing.

Passengers tend to congregate in the area of the seats 31C, 31 D and the seats of the last 32nd row while waiting to visit lavatories and causing discomfort to passengers of these seats.

Thanks to visiting AirlinesFleet.com and read article : KLM Fleet Boeing 737-800 Details and Pictures.