The overall length of the aircraft is 39.5m.

The advanced- design Next- Generation 737 has proven to be the most cost- efficient, reliable and capable single- aisle aircraft.

In comparison to the 737-700, the 737-800 also features the new Sky Interior with sculpted ceiling and sloping overhead storage bins which leaves the cabin feeling much more open and spacious.

Jeju Air flies their Boeing 737-800 both domestically and internationally.

The Jeju Air first version of this Boeing 737-800 is a single class configuration with 189 passenger seats. 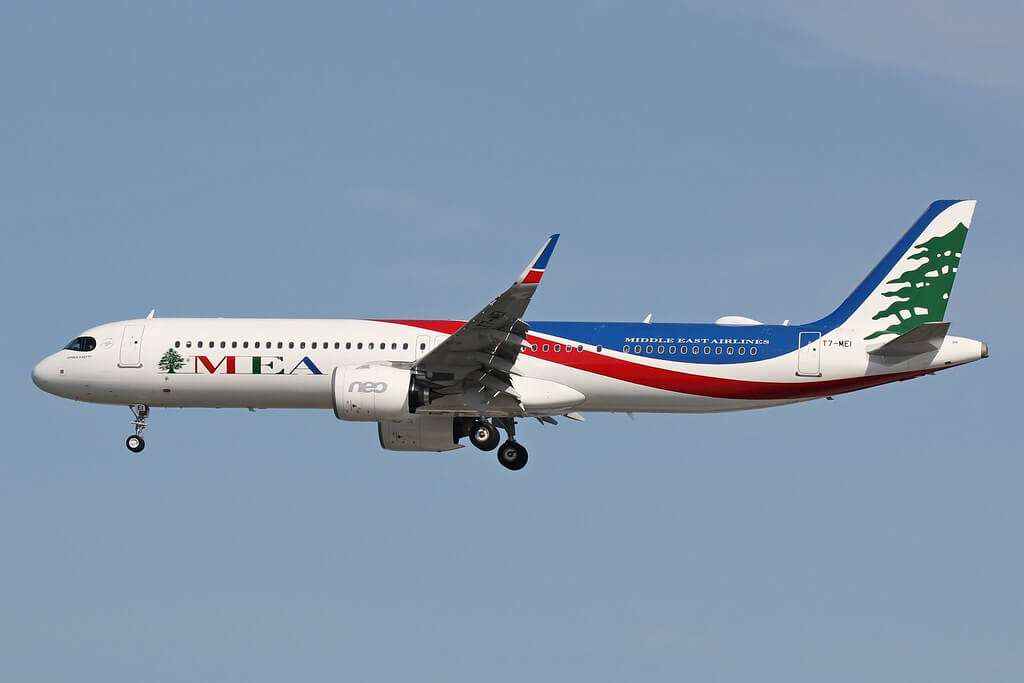 The airline’s A321neo is powered by Pratt & Whitney’s PurePower PW1100G-JM geared turbofan engines and is configured in a comfortable two-class layout with 28 seats in Business and 132 seats in Economy Class and the latest generation in-flight entertainment system and high-speed connectivity.

The A321neo is the largest member of the A320 Family, seating up to 240 passengers, depending on cabin configuration.

Incorporating the latest engines, aerodynamic advances, and cabin innovations, the A321neo offers a reduction in fuel consumption of 20% as well as a 50% noise reduction.

While the Airbus A321neo aircraft cabin can accommodate 240 passengers, MEA chose to customize it to accommodate only 160 passengers, 28 seats in Business class and 132 in Economy class, with a view to provide the passengers with the highest well-being.

The cabin combines luxury and spaciousness.

It is equipped with the best seats and latest generation in-flight entertainment system in both Business and Economy classes, including high speed internet connectivity, reflecting the company’s ambition to provide customers with the best products in the aviation industry.

MEA’s new A321neo aircraft will be fitted with the Panasonic Avionics (PAC) eX1 inflight entertainment and eXConnect inflight connectivity solutions at the Airbus factory prior to delivery.

The eX1 platform is optimized for single-aisle aircraft.

It features full HD screens at every seat, powered by individual handsets or the touch-screen display.

This includes the new(ish) Newtec modem announced in 2016.

The upgraded modem delivers significantly improved performance, removing it as a bottleneck in the communications channel between the aircraft and the ground. 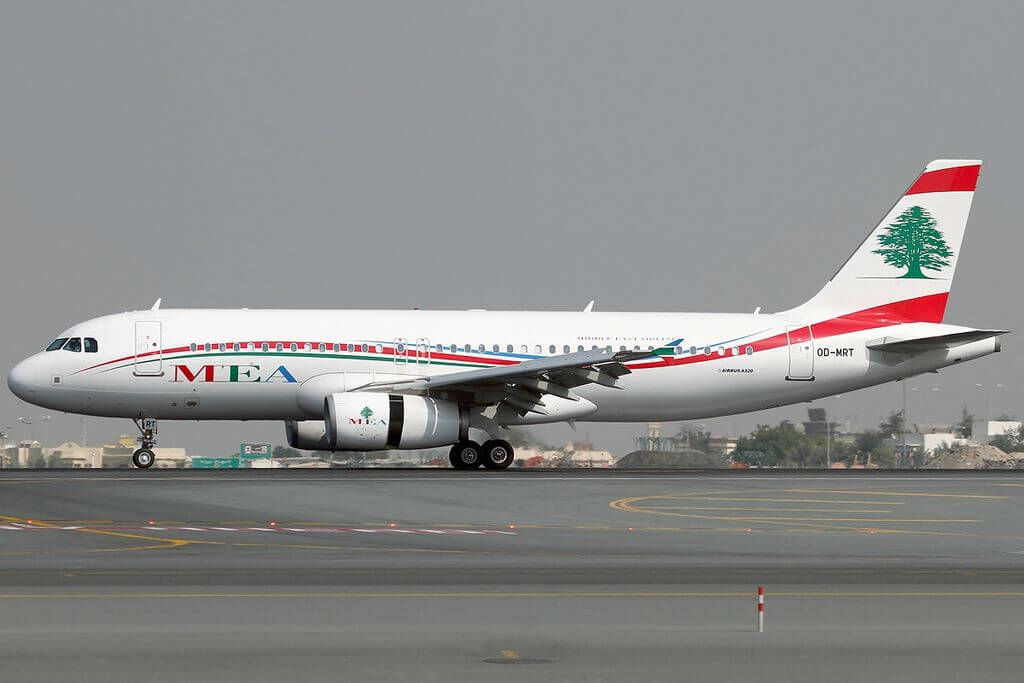 MEA has chosen a spacious layout for its A320, consisting of 24 seats in Cedar Class (Business) and 102 in Economy Class.

The A320 is powered by I.A.E. V2533 engines each delivering 27,000 lb of thrust and meeting the stringent noise requirements.

The interior colors of MEA´s fleet were selected to reflect the Lebanese relaxed and lively atmosphere.

The aircraft cabin specifications took into consideration the needs of passengers with limited abilities.

MEA´s fleet is equipped with ventilated and temperature controlled cargo compartments for the carriage of live animals and perishable cargo.

Middle East Airlines (ME) flies its Airbus A320-200 aircraft on short- and mid-haul routes.

All of its A320-200 aircraft are configured with 24 recliner-style Business Class seats in a cabin named Cedar Class and 102 standard Economy Class seats.

While not lie-flat, the Cedar (business class) seats onboard the A320-200 are quite comfortable loungers.

The seat was controlled electronically and had seen better days.

Personal IFE was also provisioned in the center arm rest of each seat.

Power port and headphone jacks were located between seats.

No amenity kits were provided.

Economy class seats even came with hooks/knobs for hanging coats on.

The menu system is average and selection is sub-par compared to other airlines.

One particularly annoying note is that the IFEs aren’t available until well after take-off.

Unlike some other Middle Eastern airlines (Saudia, Kuwait Airways), MEA serves alcohol on their flights. 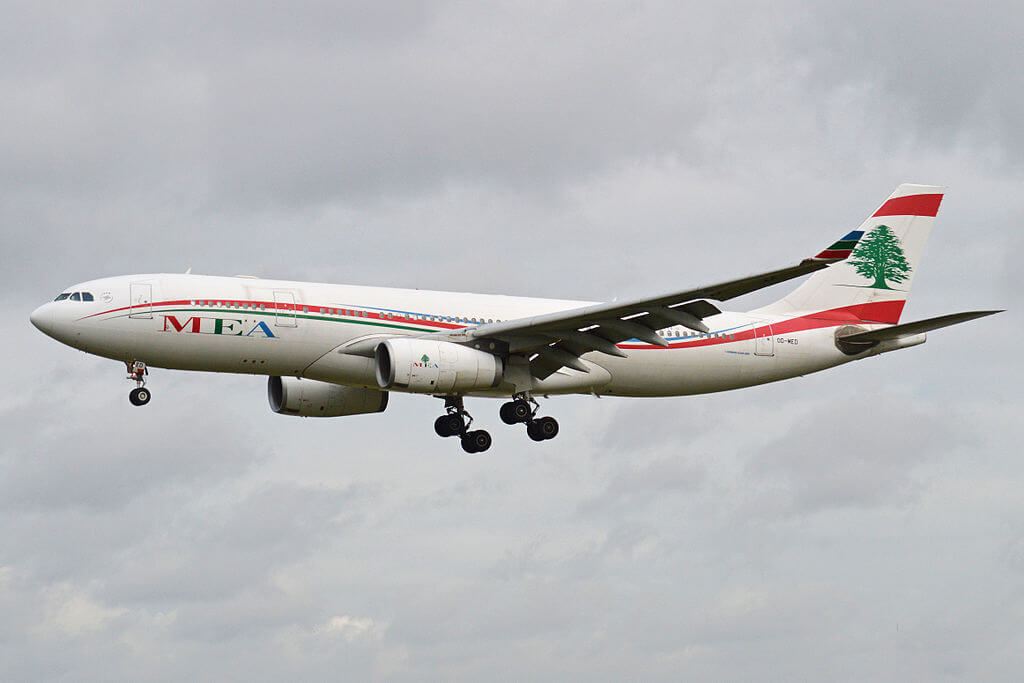 The airline primarily operates routes to Europe, the Middle East, and North and West Africa.

MEA has chosen a spacious layout for its A330, consisting of 44 seats in Cedar Class (business) and 200 in Economy Class.

The A330-200 is powered by Rolls Royce Trent 772 engines each delivering 72,000 lb of thrust and offering one of the lowest operating costs.

Middle East Airlines (ME) flies its Airbus A330-200 aircraft on long-haul routes.

All of its A320-200 aircraft are configured with 44 Business Class seats that transform into angled flat beds in Cedar Class and 200 standard Economy Class seats.

The 44 seats in business class (Cedar Class) are spread out in one single large cabin.

Qatar Airways has a similar open cabin style on its A350-900s without QSuite.

It’s interesting how they have a single business class cabin.

Rather than having a galley or bathrooms by the second set of doors where everyone boards, they instead just have a big open space, so all eight rows of business class are in a shared cabin.

This makes the cabin feel open and spacious, though also less intimate and private.

It also means that row five has an outrageous amount of legroom.

At each seat was a pillow and blanket.

There were no amenity kits or slippers, though each passenger did receive an alright pair of headphones.

MEA doesn’t have Wi-Fi on their planes, though each seat has a personal television.

The selection was quite limited, and just included a bit over a dozen movies, and a similar number of TV shows.

The food was plentiful and very tasty, and the crew were efficient, friendly and fun.

One downside is the layout of the MEA A330 cabin.

Bizarrely, MEA does not split its economy cabin on the A330 into two like most airlines, which creates one giant mega cabin.

And when you’re in the middle, you’re not close to crew service or toilets. 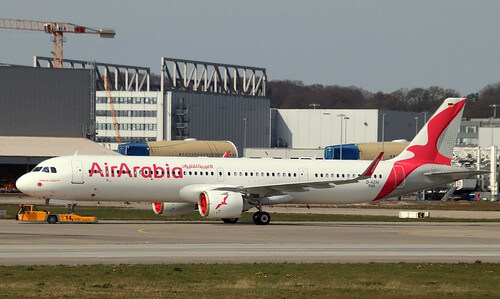 Air Arabia is the first Middle Eastern airline to operate the A321neo LR and this brand new aircraft that will join Air Arabia’s fleet that comprises of 53 A320 Family aircraft serving more than 155 routes across the globe from four hubs in the UAE, (Sharjah and Ras Al Khaimah), Morocco and Egypt.

The addition of the A321neo LR will enable Air Arabia to expand to new medium-haul markets in addition to strengthening the existing routes with increased seat capacity.

The A321neo LR builds on the success of the A321neo and provides additional flexibility as it has the longest range of any single-aisle airliner, enabling airlines to tap into new markets previously not accessible.

Air Arabia’s Airbus A321neo LR is a standard aircraft with economy seats and can hold 216 passengers.

Air Arabia’s new A321neoLR will accommodate 215 passengers and is equipped with Air Arabia’s new cabin interior that was launched as part of the new brand identity unveiled in October last year.

The newly delivered Aircraft features a total of 215 seats, which is slightly more than the standard configuration of 215 seats, and will allow us to expand services on longer distances routes up to 7 hours.

Air Arabia offers a wonderful assortment of great value gifts for yourself, your friends, family or business associates.

Air Arabia onboard duty free catalogue has many exciting options for you ranging from accessories, watches, jewellery, sweets, perfumes etc.

All at extremely discounted prices.

Air Arabia offers a variety of in-flight TV programmes showing a selection of movies, sporting adventures, world recalls, comedy series and many others.

In-flight TV programmes are pre-selected and vary as per sector of travel. 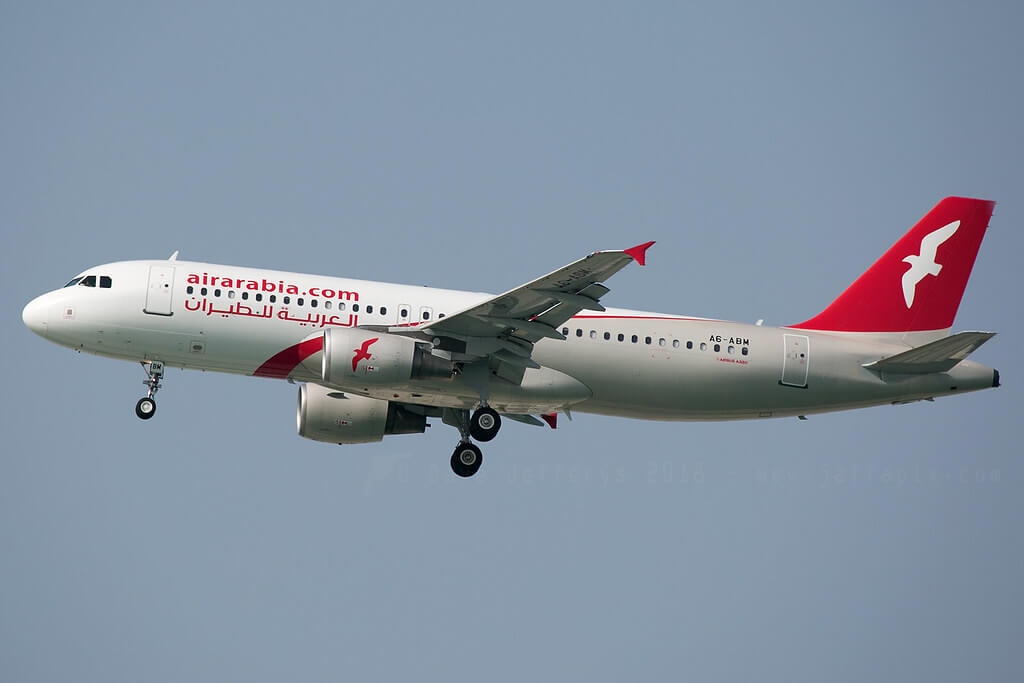 The latest A320 aircrafts come equipped with Shraklets, fuel saving large wing tip devices which reduce fuel burn and emissions by significantly improving the aerodynamics of the aircraft.

Air Arabia is the first carrier in the Middle East to fly these planes.

All aircraft will feature a comfortable single-class cabin with one of the most generous seat pitches today.

Air Arabia’s Airbus A320-200 is a standard aircraft that can hold 174 passengers on single economy class configuration with a generous 32-inch seat pitch..

All aircraft cabin interiors are fitted with world-class comfort seats, offering one of the most spacious economy cabin seat pitch.

Air Arabia offers a wonderful assortment of great value gifts for yourself, your friends, family or business associates.

Air Arabia onboard duty free catalogue has many exciting options for you ranging from accessories, watches, jewellery, sweets, perfumes etc.

All at extremely discounted prices.

Air Arabia offers a variety of in-flight TV programmes showing a selection of movies, sporting adventures, world recalls, comedy series and many others.

In-flight TV programmes are pre-selected and vary as per sector of travel.

Thanks to visiting AirlinesFleet.com and read article : Air Arabia Fleet Airbus A320-200 Details and Pictures.