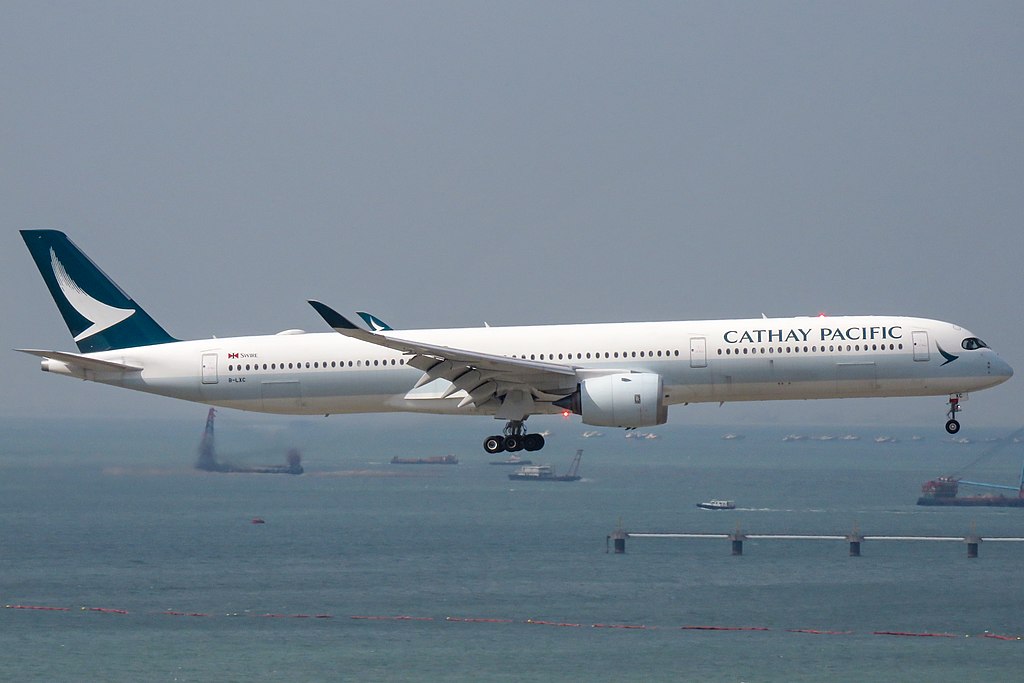 This aircraft have more capacity than A350-900.

Powering the A350-1000 are Rolls-Royce Trent XWB-97 engines that allow the largest member of the A350 XWB Family to attain high levels of efficiency.

Each engine provides 97,000 lbs. of thrust on takeoff – the most powerful engine ever developed for an Airbus aircraft – providing additional payload capability and range.

With these specially-tailored Trent XWB powerplants, the A350-1000 is capable of long-haul routes to emerging markets such as Shanghai-Boston or Paris-Santiago, as well as more traditional flight segments as Manchester-Los Angeles or Dubai-Melbourne.

On this aircraft, most bulkhead seats are designated as bassinet locations.

Cathay Pacific decided to continue using seat manufacturer Zodiac, now Safran, for the A350 seats but with the newest version of the reverse-herringbone Cirrus III.

The middle seats continue to angle towards each other and still lack a privacy panel.

Fortunately, the seats are positioned far enough back that you cannot see your neighbor unless you lean all the way forward.

You can also leave the storage cupboard door open for a tiny bit extra privacy.

Strangely, the cabin began with Row 11, which only had two middle seats, and continued back to Row 23, skipping Row 13.

The window seats were set up for privacy, with a large shell surrounding much of the passenger.

The reverse-herringbone seat arrangement meant the seat was angled toward the windows.

While many seats had two windows, the window spacing resulted in some rows only having one.

The middle seats were best for couples.

While you didn’t see your seat partner when sitting back, it was easy to see them when leaning slightly forward.

Next to each seat was a small, well-designed cabinet that latched shut.

At boarding, this cabinet was loaded with the amenity kit and noise-canceling headphones, which hung from a hook for just this purpose.

Cathay Pacific has similarly made few changes in the premium economy cabin from what passengers will find on board the A350-900.

Capacity is, again, the most noticeable change here, with the -1000 having an extra row of four seats in the centre.

However, with all business class seats on the -1000 being in a single cabin rather than split across two sections as they are on the -900, the premium economy cabin now has access to a lavatory immediately in front of it, meaning passengers don’t have to walk through the economy class cabin to reach the restrooms.

As for the seat products themselves (developed by Rockwell Collins), these are akin to those found on the -900.

Pitch is 40 inches, width is 18.5 inches and recline goes up to nine inches.

All seats have a 12.1-inch TV, and power and USB outlets, and with the exception of front-row seats, all have a small seatback mobile/tablet shelf positioned at eye level for holding devices.

Economy class is where Cathay Pacific has put most of its effort with regards to upgrading the seat, with the A350-1000 featuring yet another new economy class product from the airline.

While the -1000’s seats (designed by Haeco Cabin Solutions) do look rather similar to the B777 seat, they are actually a different product.

There is also a new foldout tablet and cup holder located just below the IFE screen, as well as a revamped tray table below that.

Passengers also have access to USB and AC power outlets.

In the upright position, this is a comfortable seat.

There’s plenty of support provided despite its more slimline design, and my knees were at least an inch from touching the seat in front of me – at 6”5 (195cm) tall, this is something of a rarity for me in economy.

Toilet suitable for passengers with reduced mobility, emergency exit rows and extra-legroom seats are located at the front of the last Economy class section.

In Business class, there are toilets and galleys at the front and the end of the section and baby bassinet seats are at row 12.

Galleys are at the end of the last section.

Baby bassinet seats are located at the first row of each section.

Thanks to visiting AirlinesFleet.com and read article : Cathay Pacific Fleet Airbus A350-1000 Details and Pictures.