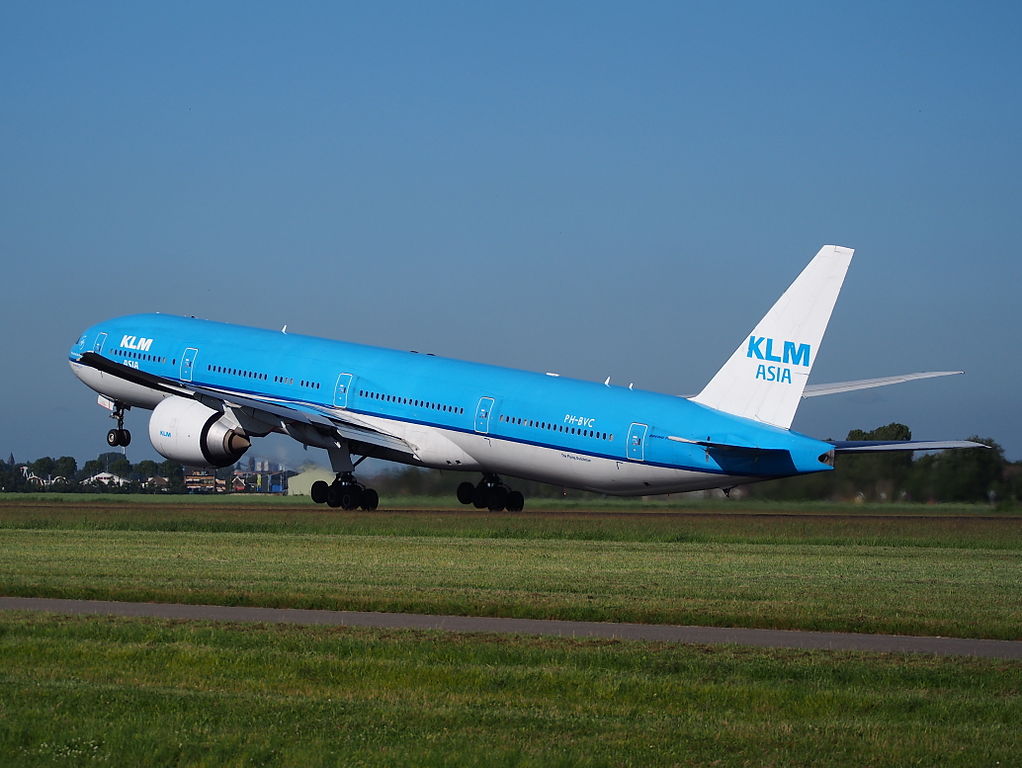 The performance and economics of the 777-300ER are unbeaten, and its range, capability and efficiency help operators maximize profits.

That’ s why the 777 is the most popular and commercially successful twin aisle aircraft of all time.

Business class adopts a 2-2-2 layout aboard KLM’s Boeing 777-300ERs, with five rows of seats in the forwardmost section, and an extra row further back.

These are lettered as AC-DG-HK, so couples travelling together may prefer the window-side pairs, while solo flyers will naturally gravitate to the centre for direct aisle access without a neighbour climbing over them, or vice versa.

Seat pairs on the sides angle away from the aisle for just a tad more privacy when travelling with a companion.

For solo flyers in the centre, a fixed privacy divider between each seat will be appreciated, and becomes most useful when the seats are in ‘bed mode’.

Each transforms into a fully-flat bed measuring 51cm (20 inches) wide and aproximately 200cm (79 inches) long in most rows, with a pillow and blanket provided.

In terms of available legroom, this depends on where you’re sitting. In most rows, the seat narrows at the end, with a fixed shelf forming the tail end of your bed.

Good thing about economy seat of B777-300ER for KLM is there’s no IFE box below the seat (in B777-200ER, entertainment box is located on seat A and H reducing legroom and flight comfort for long hour flight).

Seat pitch was of industry average but it still felt roomy.

With economy cabin of B777-300ER is set at 3-4-3 configuration, there is a considerable less aisle width as compared to the aisle of B777-200ER that the company operates.

This version of Boeing 777-300ER operated by KLM may accommodate 408 passengers: 34 in business class, 40 in economy comfort and 334 in the economy class.

Business class seats offer flat bed seats that have 180 degree recline and are located in two sections: first section consists of 5 rows of seats: 4 rows have 2-2-2 configuration and 1 row has 2-2 configuration.

Close location of the galleys and lavatory may cause discomfort to passengers of the seats of the 1st and 5th row.

Lack of floor storage during take-off and landing is one more disadvantage of the seats of the 1st row.

The second section of business class seats has only 1 row that contains 6 seats.

These seats, the seats of the 6th row have the same disadvantage – proximity of the galleys and lavatory.

Economy comfort consists of 4 rows of seats that have 3-4-3 configuration.

The seats of the 10th row are a little narrower than standard and have no floor storage during take-off and landing.

334 seats of the economy class are divided into three sections.

Most of the economy class seats have 3-4-3 configuration.

Location of the lavatories behind will cause discomfort to passengers of the seats 20G, 20HJK, 21DEFG and 22ABC.

Second section with 14 rows of seats is located behind the exit row.

Passengers tend to congregate in the area of the seats 30ABC and 30HJK while waiting to visit lavatories causing discomfort to passengers of these seats.

Passengers of the seats 30BC and 30HJ will feel comfortable thanks to additional space for their legs.

The legroom of the seats 30A and 30K on the contrary is limited by exit doors.

Among other disadvantages of the seats of the 30th row: reduced width and no floor storage during take-off and landing.

Because of the bulkhead position the seats 30DEFG have limited legroom.

Also as the tray tables are in the armrests the width of these seats is reduced.

Lack of floor storage during take-off and landing is another disadvantage of these seats.

The noise from the galleys and lavatories will cause inconvenience to passengers of the seats of the 43rd row.

The third section of economy class seats is located behind another exit row.

The main disadvantages of the seats of the 50th row are: close location of the galleys and lavatories, reduced width and lack of floor storage during take-off and landing.

Also, the seats 50A and 50K have limited space for passengers legs due to protrusion of the exit doors.

Exit row located in front provides extra legroom for passengers of the seats 50BC and 50HJ.

Due to position of the bulkhead the seats 52DEFG have limited legroom.

Location of the galley in front, tray tables built-in the armrests that reduce the seat width and lack of floor storage during take-off and landing are the main disadvantages of these seats.

Due to missing seats behind the seats 52D and 62H are often bumped by other passengers passing by.

Another disadvantage of the seat 62H is location of the galleys behind.

Location of the galleys and lavatory behind is the main disadvantage of the seats 62ABC and of the last 63rd row.