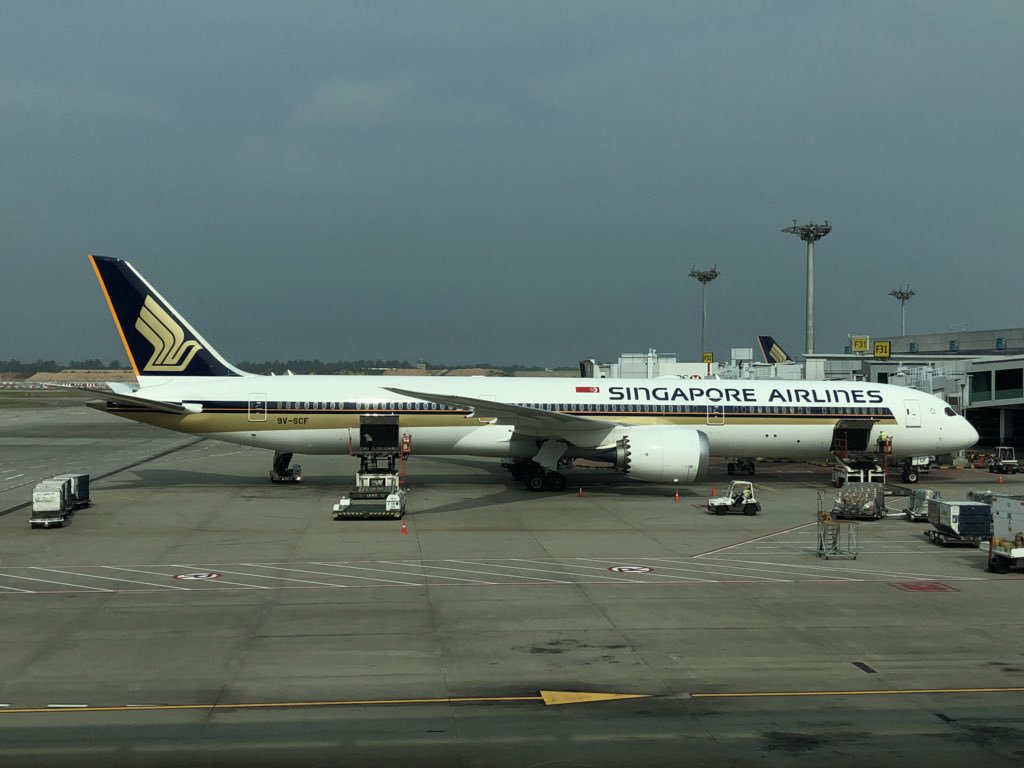 Singapore Airlines is the first to fly the new Boeing 787-10 Dreamliner.

Designed to be more uplifting in every way, the cabin offers a more tranquil experience.

The SQ Boeing 787-10 operates short to medium-haul flights from Singapore to destinations across Asia, and some longer flights to Australia and Japan.

The 787-10 is the longest variant of Boeing’s Dreamliner range of aircraft, which are constructed using technologically advanced lightweight composite materials.

Singapore Airlines flies the Boeing 787-10 in a two class configuration.

All of Singapore Airlines Boeing 787-10 Dreamliner aircraft are in the same configuration – 36 of the latest 2018 regional business class seats in a 1-2-1 configuration with direct aisle access for all passengers and 301 economy seats in a 3-3-3 configuration.

The latest regional business class seats (which we call 2018 RJ) are fitted on the 787-10 Dreamliner.

These are in a staggered 1-2-1 configuration, providing direct aisle access to all passengers.

Laterally the seats alternate row-by-row so some seats are aligned closer to the aisle while others are against the window or immediately next to each other in the middle.

Privacy is good with large ‘wings’ around the headrest area, and retractable privacy dividers between the ‘paired’ middle seats in case you don’t know your neighbour.

Business class on the 787-10 occupies a large single section of nine rows located between the first main set of aircraft doors and the second set.

Seats 11A and 11K, the window seats in the front row, each feature a bassinet position which unusually also doubles as a very handy storage area if you’re travelling without an infant.

While stowage there is not permitted for takeoff and landing, once in flight it’s a very useful place to have your bag in easy reach throughout the journey.

The foot well and stowage directly beneath are also much bigger at all row 11 seats, making the seat slightly bigger when converted to bed mode too.

The literature pocket is also a more useful flat shape for stowing your own items.

Be aware however the two business class toilets and the business class galley are located directly in front of row 11, meaning more noise and foot traffic in this area.

If an infant is travelling in one of the bassinet positions there is also the possibility of some disturbance.

We would aim towards mid cabin on a longer night flight for these reasons.

Seats 16A and 16K: These window seats are missing a window. Avoid.

Row 20: There is a large galley at the back of the business class cabin where the second main aircraft doors are located, which serves the forward economy class cabin.

That means there may be increased noise in this area. Row 41, the first row of economy, also has three bassinet positions. If any infants are travelling in that section – some noise is possible. Caution.

If travelling solo, any of the window seats (A or K) are nice and private, but those aligned against the window (at rows 12, 15, 17 and 19) will give you the highest level of privacy.

We would go for the ‘love seats’ middle pair, as it’s easier to talk and provides the best food envy at meal times.

That’s because the side console of each seat is located between you both, making it very difficult to interact at all.

These seats are more suited to solo travelers.

The economy class section on the 787-10 Dreamliner is split across two cabins of roughly equal size.

The forward section, which also houses the main bank of toilets for economy passenger use, and a rear section between the third and fourth main aircraft doors, with two additional toilets at the rear.

Cabin service in the forward section (rows 41 to 57) is conducted from a galley at the front of that section, where the second main aircraft doors are located.

The rear section (rows 58 to 75) are served from a galley at the very back of the plane.

Extra legroom seats can be found at row 58 on this aircraft at 58 A/B/C and 58 H/J/K, but be aware of a single bassinet position at one of the middle seats in this row (seat 58E), which might give rise to some noise issues.

It’s easy to avoid proximity to the toilets by choosing a seat towards the front of the second economy cabin (we would suggest rows 58 to 66), or the middle of the forward cabin, around rows 48 to 51.

Note also that seats 58 D/E/G are not sold as extra legroom seats, but they have plenty of it.

Row 41: The first row in the forward economy class cabin is right behind two toilets and a galley area, and also houses three bassinet positions.

That raises concerns around foot traffic, queuing and noise. Avoid.

Seats 57 A/B/C: This seat trio is located at the back left of the forward economy class section, just ahead of the third main aircraft door.

Although Singapore Airlines does not mark it as such, there is no window at this location.

There is also a toilet located to the right of these three seats, with the entrance very close to seat 57C.

Row 69: This row is labelled as missing a window on the Singapore Airlines seat map, but it’s not nearly as bad as Seats 57 A/B/C shown above.

You may still wish to avoid this row however – if you enjoy the view outside.

Rows 73, 74 and 75: Although we mentioned that seats 74 H/K and 75 H/K are the only good couple options in economy on the 787-10, all these seats in these three rows have the drawback of being right at the back of the plane in close proximity to the rear toilets and galley meaning more foot traffic, queuing and noise. Avoid.