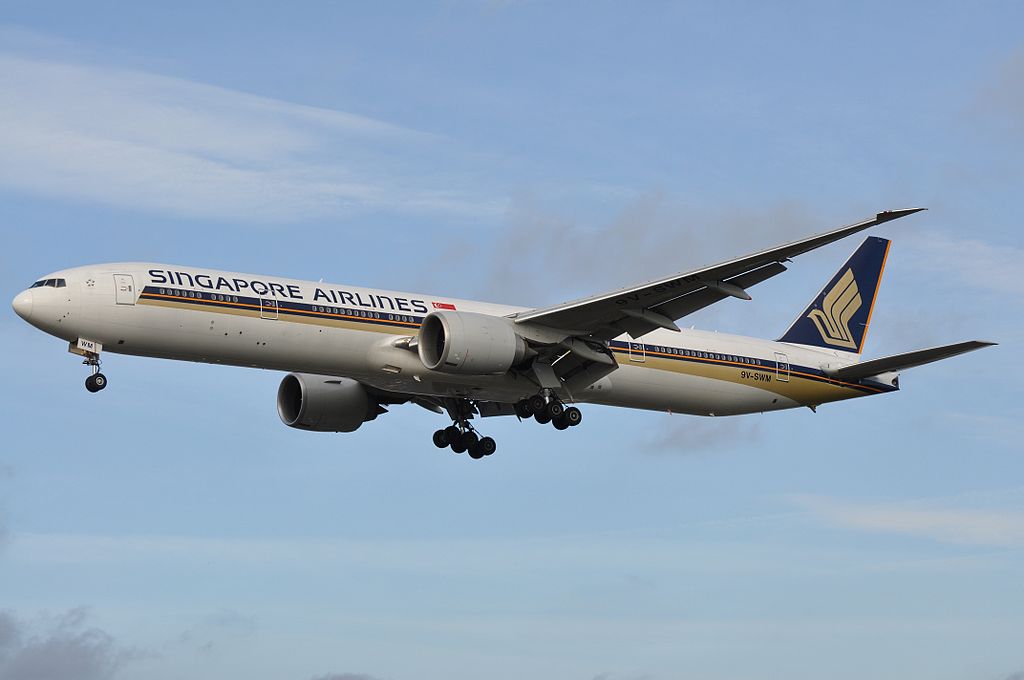 The Singapore Airlines Boeing 777-300ER aircraft is operated on medium to long-haul routes.

The Boeing 777-300ER aircraft is designed for a comfortable and reliable journey, no matter how far your travels take you.

This aircraft is one of the newest additions to the Singapore fleet and has updated seats and entertainment.

On the newest versions of this aircraft, every seat has a 110V AC power port and a USB port.

If you’re flying Business Class the seat map should show a 1-2-1 layout.

If you’re flying Premium Economy Class the seat map should show a 2-4-2 configuration from rows 31 to 34.

If you’re flying Economy Class, the seat map should show a 3-3-3 configuration all the way to the last row (row 62).

If the seat map does not resemble the above options in your respective travel class, it’s possible you’re flying on a 777-300 (non-ER).

All of them are standard.

The seats 1CD and 2CD are perfect for passengers traveling with a companion.

First two rows of business class seats are located in the first section.

The seats of the 11th row are considered the best seats as they have extra legroom.

All these 8 seats of the first section have an exclusive feel of mini-cabins.

The seats 12A and 12K have misaligned windows.

The second section of business class seats has 9 rows of seats.

Passengers traveling with infants are often seated on the seats 14A, 14K and 15DF as these seats have bassinet locations.

These seats offer extra legroom to passengers of these seats. However, proximity of the lavatories and bulkhead position may cause discomfort.

Behind the exit row 2 section of economy class seats are located.

There are totally 228 standard seats here.

The seats 31A and 31K have extra legroom.

Among disadvantages of these seats: reduced width of these seats , lack of floor storage during take-off and landing and it can get cold by the exits during the flight.

The seats 31BC and 31HJ are designated as preferred seats as they offer extra space for passengers’ legs.

However, passengers of these seats may get cold by the exits during the flight.

As the tray tables are in the armrests the width of these seats is slightly reduced.

Also there is no floor storage for these seats during take-off and landing.

The seats 31DEG have the same disadvantages.

The position of bassinets may be bothersome for passengers of these seats.

But thanks to extra legroom passengers of these seats will feel comfortable.

The seats 41A and 41K have misaligned windows.

Due to missing seat behind the seat 42C is often bumped by other passengers and crew members passing by.

The only disadvantage of the seats 42HJK and of the seats of the 43rd row is proximity of the galley and lavatory.

For passengers traveling with a companion will be ideal the seats 43AC.

13 row are located in the second section of economy class seats.

All the seats of the 44th row have the following disadvantages: noise that is coming from the galleys and lavatories will cause discomfort to passengers of these seats, as the tray tables are built-in the armrests the width f these seats is reduced a little, lack of floor storage during take-off and landing is another disadvantage.

The seats 44A and 44K are considered bad seats as they have no windows and the exit doors protrude out of the wall.

The seats 44BC and 44HJ are designated as preferred seats as they offer extra legroom to passengers.

Position of the bassinets may cause inconvenience to passengers of the seats 44DEG.

Extra space for passengers legs provides additional comfort to passengers of these seats.

Limited legroom is the main disadvantage of the seats 53BC and 53HJ.

The seats 55C and 55H are often bumped by crew members and passengers passing by due to missing seats behind.

The seats of the last 56th row are considered bad seats as they are less reclining than standard and are located close to the galley and lavatories.

The seats 56AC and 56HK will be ideal for passengers traveling with a partner.

This is a very small and private cabin right at the front of the aircraft, with only four seats occupying a single row which makes it the most exclusive cabin in the Singapore Airlines fleet.

There are no bad seats in first class in our opinion, so separating the best from the worst is certainly nitpicking.

For solo travelers, the window seats (A or F) are an obvious choice if available.

The B777-300ER has a small intimate cabin of just four First Class seats in total, the most exclusive cabin offered by the airline, with the latest 2013 F seats installed (as pictured above) featuring extended curved privacy partitions.

Seat 1F is the furthest you can be from the single bassinet position in this cabin (which is at seat 1A, as depicted).

While the presence of an infant in the First Class cabin is rare, it is a possibility.

Couples will probably appreciate the slightly more sociable arrangement of the C/D pairs in the middle, with only one of these pairs available.

Should you only have a C/D seat to choose from as a solo traveler however, don’t fear, as there is a size-able privacy divider which isolates you from your neighbor.

We can’t think of any bad seats in the First Class cabin on the SQ 777-300ER aircraft.

Business class on the SQ 777-300ER occupies the rear of the forward cabin section, just ahead of the second main aircraft door, and the entire second section between the second and third main doors. It is equipped  in a 1-2-1 configuration flat bed seat – the relatively new 2013 J product.

The Business Class cabin on the 777-300ER aircraft features a small three-row forward cabin, and a larger second cabin behind the second main aircraft doors.

While some people appreciate the feeling of space in the larger second cabin, personally we prefer the smaller forward cabin, which is quieter and has less foot traffic as service is conducted from the galley behind row 14.

The forward section also benefits from no bassinet positions, ensuring a peaceful experience for those lucky enough to secure a seat here.

Row 11 is probably the most private row on the aircraft, particularly the window seats 11A and 11K.

The alternative bulkhead seats are at row 15, which doesn’t feel as exclusive as the front of the smaller forward cabin and has the drawback of being the only bassinet position in the Business Class section on this aircraft.

Both row 11 and row 15 have more space especially for your feet as the ‘cubby hole’ style foot-well found in other seat rows is gone – replaced by a spacious full-width bench which also makes the bed bigger once the seat is converted. In these seats there is no need to extend your legs at an angle while sleeping.

We would avoid Row 23 due to proximity of the premium economy cabin, with the bassinet position in that cabin section located right behind you.

Row 14 is a mixed bag, it’s in the nicer forward section but does suffer a little from galley and toilet disturbance.

It also features only one window, instead of two at the other rows.

We wouldn’t necessarily avoid it completely, but if there is a seat in row 11 or 12 available it would be better.

If travelling solo, one of the window seats (A or K) is preferable, giving you the highest level of privacy.

As a couple it’s up to you whether you prefer two A or K seats one in front of the other, or the slightly more sociable (but still sufficiently private) D/F middle pair.

We tend to go for the middle pair, as it’s easy to talk and provides the best food envy at meal times.

Premium Economy is located after the Business Class cabin, directly behind the third main set of aircraft doors.However,

There are four rows (three rows at the windows) with a 2-4-2 configuration, for a total of 28 seats.

Seat width is 19.5 inches and seat pitch is 38 inches, the same as on the A380, but wider than the A350 which has a narrower fuselage, so choose this aircraft or the A380 if you want the best premium economy seat.

However, one benefit of the A380 over the 777-300ER at the window seat is some extra space between the window seats and the cabin wall, due to the fuselage curvature.

The first row in the cabin, Row 31, has additional legroom, but be aware of a few drawbacks – firstly it’s the bassinet row (though there’s probably no escaping the sound of a screaming baby in this small cabin), secondly the IFE screens are mounted on the bulkhead wall in front of you, not housed in the armrest as with other seats in this cabin.

Thirdly the A and K seats are missing a window.

Row 33 (row 34 in the middle D/E/F/G seats) may suffer increased noise from the first row of the Economy Class cabin directly behind, which is also a bassinet position.

It may be better to choose a seat further forward.

Solo travellers will probably want to opt for one of the aisle seats (C, D, G or H), or possibly a window seat (A or K) depending on personal preference.

There are no dedicated toilets in the premium economy section, and you aren’t allowed forward into the Business Class cabin to use their toilets, so that means heading back through an economy section of seven rows to use the main bank of economy toilets at the fourth main set of aircraft doors.

Three toilets are located at the galley area around the fourth main door, separating the two economy seating sections, with three more toilets at the rear galley area.

Extra legroom seats can be found at row 41 and row 49 on this aircraft, but beware the bassinet positions across two of the seats in each of these locations.

These are well worth considering if you are travelling as a pair, though they do come with their drawbacks (see below).

The forward section of the smaller economy cabin would be our preference, as the service is from a galley behind this section and additionally toilets are all to the rear.

This should reduce foot traffic and noise, though bear in mind premium economy passengers will be passing through this section to use the toilets at the fourth main door.

Row 47/48: The last row of the forward Economy Class cabin is right in front of the mid galley and three of the toilets, so it’s susceptible to increased foot traffic, queuing and noise. Avoid, unless you value the pair seating in row 48 as a couple (see above).

Seats 49 A/K: These seats are missing a window, but do have extra legroom.

They are also close to a main galley and toilet area on the aircraft. Avoid.

Seats 61 A/C/D/E/G & 62 H/K: The last row of the rear economy class cabin is right in front of a large toilet and galley area, so it’s susceptible to increased foot traffic and noise.

Avoid, unless you value the A/C or H/K pair seating as a couple, in which case 61 H/K are the ones to go for as there is still another row behind them.