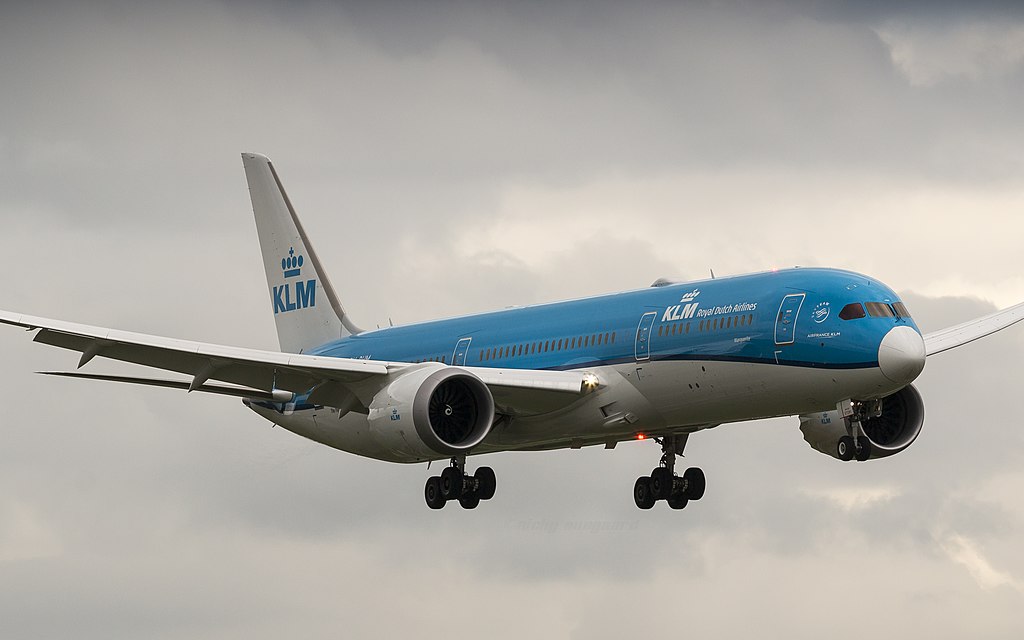 Its variants seat 242 to 335 passengers in typical three-class seating configurations.

It is the first airliner with an airframe constructed primarily of composite materials.

The 787 was designed to be 20% more fuel-efficient than the Boeing 767, which it was intended to replace.

The layout of this plane was interesting for a few reasons: Usually on long-haul aircraft, you’ll have two smaller premium cabins, but the entire business-class section on this one was in a single cabin — and it wasn’t very large.

Each seat had 42 inches of pitch, was 20.25 inches wide — with the armrest lowered, it was more like 25 inches — and reclined to a fully flat bed.

KLM’s business class cabin takes up the entire space between the first and second set of doors on the 787-9, and consists of a total of 30 seats.

KLM has reverse herringbone seats on these planes, so there are four seats in each row — one along each side of the fuselage, and then two in the middle.

As is the standard with these reverse herringbone seats, the TV flips out from the seat in front.

The footwell was a decent size.

In general it’s a little less spacious on the 787 than on the 777 with these types of seats, since the cabin isn’t quite as wide, and therefore the seats aren’t as angled.

The tray table also extended from the right side of the seat, and could be folded over in half.

USB and 110v outlets were located underneath the seat and to the right.

On the opposite side of the aisle was an armrest that could be raised or lowered, depending on whether you prefer the support for your arm, or prefer a wider sleeping surface.

Behind the last row of business class was one of the galleys, and beyond that were four rows of economy comfort, a total of 48 seats.

Like the other economy seats, these were arranged in a 3-3-3 pattern, but had 35 inches of pitch and were 17.5 inches wide.

By comparison, the regular economy seats were the same width but had just 31 inches of pitch — not much considering the Dutch are the tallest people in the world!

There are 216 regular economy seats.

All these seats are standard. Only the seats 1A, 1K and 2DG have such a disadvantage as close location of the galleys and lavatory in front the noise from which may be bothersome.

Behind the exit row 48 seats of economy comfort type are located.

Passengers of the seats of the 10th row will take advantage of extra space for their legs.

However, proximity of the galleys and lack of floor storage during takeoff and landing may cause discomfort.

The seats of the economy class are located in two sections.

Most of these seats have 3-3-3 configuration.

Location of the lavatories behind is the main disadvantage of the seats of the 25th row.

Thanks to the exit row located in front the seats 30ABC and 30HJK offer extra legroom.

Among disadvantages: location of the lavatories in front, reduced width and lack of floor storage during take-off and landing.

Passengers also tend to congregate in the area of the seats 30DEG while waiting to use lavatories and thus causing discomfort to passengers of these seats.

Lack of floor storage during take-off and landing is another disadvantage of these seats.

The only disadvantage of the seats 41A and 41K are missing windows.

Proximity of the lavatories will cause discomfort to passengers of the seats 43ABC, 43D, 43G, 43HJK and 44DEF.

Limited or no recline makes the seats 43ABC, 43HJK and 44DEF bad seats.