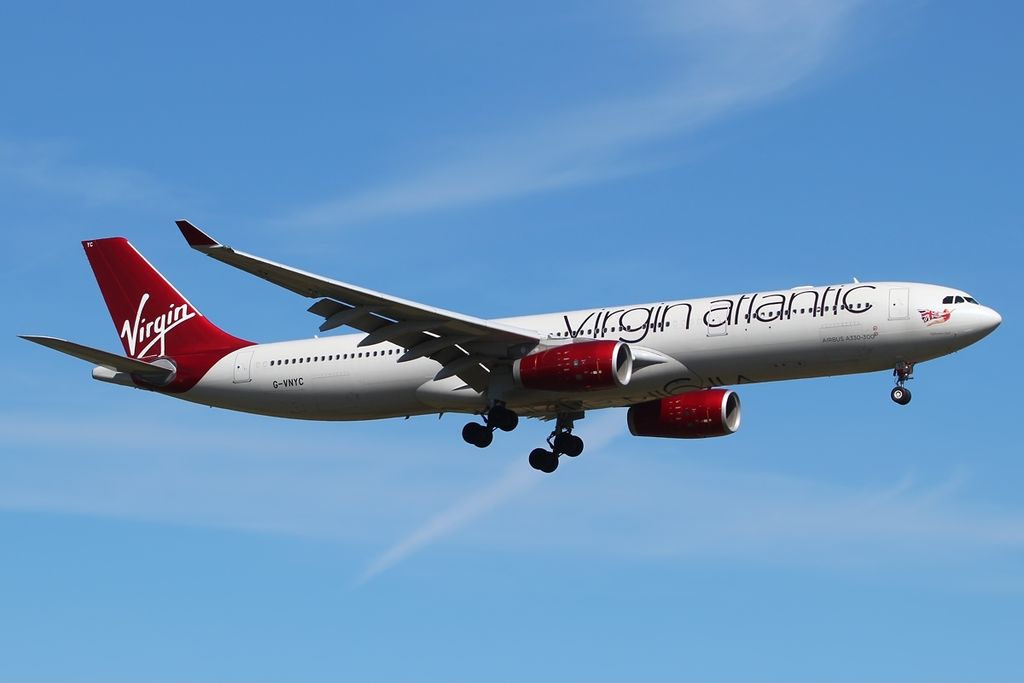 These are long-haul aircraft which transport passengers to the US East Coast, East and West Africa, the Middle East, and India.

Virgin Atlantic Airbus A330-300 are made up of 33 Upper Class seats with 180 degrees recline, 48 Premium recliner seats and 185 standard Economy seats, all featuring touch screen entertainment.

Virgin Atlantic charges extra for bulkhead, exit row, and other seats which have more legroom.

The A330-300’s Upper Class cabin comprises nine rows in Virgin’s 1-2-1 herringbone layout (A, D-G, K), with both window and centre seats angled towards the aisle.

The configuration means everyone has direct aisle access and a decent amount of privacy, as no seat is immediately next to another.

Partially opaque dividers also separate you from the passengers in front and behind.

The aisles are fairly tight, as are the galley and bar areas, so if you are on a day flight with people congregating you may have to push through to get to the washrooms, located at the front and back of the cabin (the back ones are also used by premium economy passengers so can get busy).

The new Upper Class seat is an evolution of the older incarnation rather than a complete overhaul.

Upholstered in dark brown leather, it comprises a seat and an ottoman that join together to create a 87-inch fully-flat bed (82 inches in the centre seats) – you flip over the seat to create the bed.

If you are travelling with someone they could opt to sit on the ottoman and dine with you.

The IFE control is also built into the divider, and there is a fold-down armrest, a small fold-down drinks tray, buttons for the seat recline, lumbar support and reading light, a magazine pocket, universal in-seat power via a socket at floor level, USB and other inputs and noise-cancelling headphones.

There is some storage space underneath the ottoman and inside it, and a small space for placing your bottle of water when the seat is in bed mode.

There are no overhead lockers above the central seats, which gives the cabin an open feel.

The product is very comfy and spacious – not just a regular economy seat with extra legroom.

It is 21 inches wide with at least 38 inches of legroom, and upholstered in purple leather.

The broad central armrests feature a flat section for drinks to be placed, and passengers either have footrests or, if you are directly behind a bulkhead, a supportive ottoman cushion.

There are individual 10.5-inch touchscreens and remotes in the side of the armrest/under the seat-back monitors.

The IFE system offers on-demand movies and TV shows, and there is also in-flight wifi and the ability to make voice calls and send SMS messages from your mobile. There is also the option to send messages to fellow passengers via the IFE system.

Seats in row 19 are behind the bulkhead so offer the most legroom – however, there are some downsides to sitting here.

The IFE screen lifts up out of the divide between the seats as there is no seat in front for it to be mounted on.

Although you can normally watch films during take-off and landing these days, you can’t if you sit here because the monitor has to be stored as these times.

his version of Virgin Atlantic Airbus A330-300 may transport 266 passengers in three classes: upper class, premium economy and economy.

The upper class consists of 33 open suites that have 180 degrees recline.

Most of the open suites have 1-2-1 configuration.

Proximity of the galley may be bothersome for passengers of the seats of the 1st row.

The length of the seats 1DG in total bed length is 5 inches shorter than other seats of this class.

In the end of the upper class section a bar is located.

Close location of the seats of the 8-9th row to it may cause discomfort to passengers.

As the seats 9A and 9K have no windows these seats are considered bad seats.

Behind the exit row 48 seats of premium economy class are located.

Passengers of the seats 18AC, 20DFG and 20HK will take advantage of extra legroom thanks to position of the bulkhead.

As the tray tables are built-in the armrests the width of these seats is reduced a little.

Proximity of the galley may represent a problem for passengers of the seat 19C.

The seats 21A and 21K are missing windows.

The only possible disadvantage of the seats of the last 25th row of the premium economy class is the noise that may come from more crowded economy class.

Economy class has 185 standard seats that are divided into two classes.

The best seats here are the seats of the 40th row as they may have extra space for passengers’ legs.

However, these seats are narrower than standard and have no floor storage during take-off and landing.

Limited recline is another disadvantage of the seats 45AC, 45HK and 48DEFG.

Behind another exit row the second section of economy class seats is located.

Passengers of the seats 49DEFG will feel comfortable thanks to extra legroom provided by the position of the bulkhead.

But these seats are often bumped by other passengers and crew members with service carts that use this area to cross over the aisle.

Also these seats are narrower than standard as the tray tables are in the armrests making them immovable.

The seats AC and HK of the rows 50-55 are designated as preferred seats to reserve which an extra fee should be paid.

However, the seats 50AC and 50HK are narrower than standard.

As the seats 61C and 61H jut out into the aisle, on the one hand they offer some extra legroom but on the other are often bumped by other passengers passing by.

Close location of the galley and lavatories may cause discomfort to passengers of the seats 64AC, 64D, 64G, 64HK and 65DFG.

In addition the seats 64AC, 64HK and 65DFG are less reclining than standard that is why these seats are considered bad seats.

Located in the centre of the cabin and ideal for couples or groups travelling and looking to dine and watch movies together.

Lets customers unwind and stretch out with direct aisle access.

Provides customers with extra privacy and a great view.

Thanks to visiting AirlinesFleet.com and read article : Virgin Atlantic Fleet Airbus A330-300 Details and Pictures.