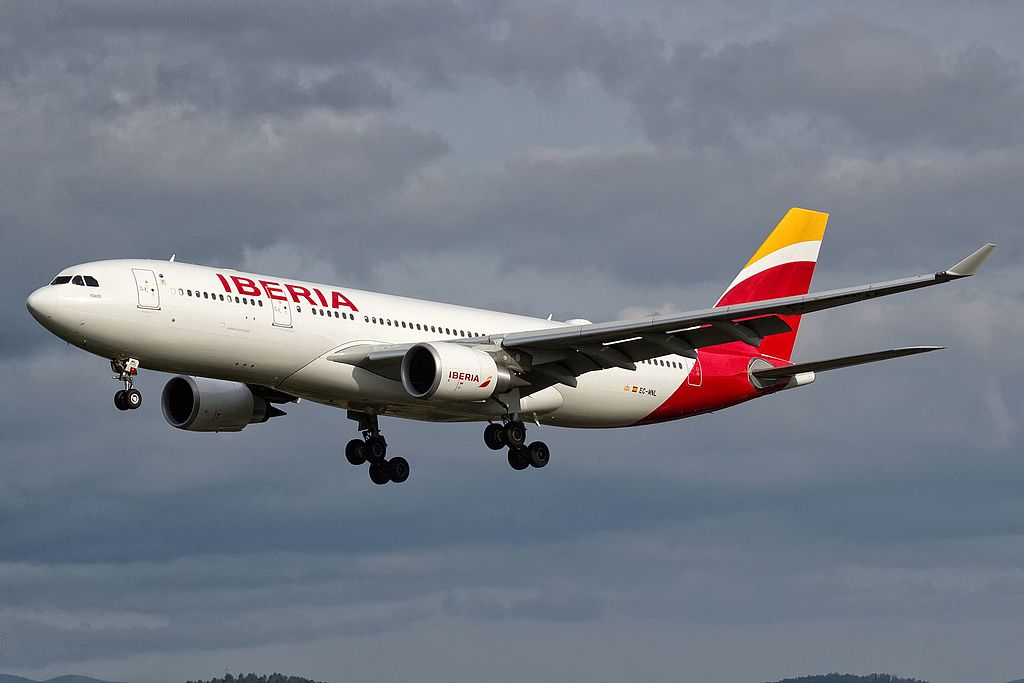 This is one of the most modern, efficient and eco-friendly aircrafts in the sky.

With a capacity for 288 passengers, it will be used on long-haul routes such as Montevideo and Buenos Aires.

The aircraft comes with enhanced details such as wider seats and more legroom in Business and a more ergonomic design with more space for the seats in Economy.

Connectivity has also been improved by increasing the download speed, so passengers can keep up with their social life at 30,000 feet.

With the incorporation of this aircraft in our fleet, planned for this month, Iberia will become the first airline in the world to take delivery of this version of the A330-200 (an A330-200 MTOW 242t, with a 242 tonne maximum take-off weight capability).

This A330-200 airplane may accommodate 288 passengers in two classes: business and economy that in Iberia is referred to as tourist class.

Iberia’s A330-200 aircraft is one of the first in its’ fleet to be outfitted with its upgraded Business Class product featuring flat-bed seating.

The aircraft’s business class cabin featured 19 staggered seats (similar to these) and was located between the first two pairs of doors.

The center section of the A330 Business Class cabin offers two different seating arrangements found on alternate rows – one where both seats are close together and one where there’s a sizeable barrier between the two.

The seats closest together will probably suit couples best as, even though there’s a divider that can be raised between the seats, they’re a little close together if you don’t know the person next to you.

These seats also have the advantage of having a fixed table between them and the aisle which gives a feeling of privacy.

The second set of center seats are probably the weakest option on this aircraft.

They’re quite far apart and separated by two fixed tables so they’re not ideal if you plan to communicate with the person next to you during the flight.

They’re also right on the aisle so passengers in these seats are prone to having flight attendants or other passengers brush past them as they go by.

Business class offers 19 flat bed seats each of which has its’ own access to the aisle.

Passengers that need more privacy should choose the seats 1EG, 2A, 2L, 3EG, 4A, 4L and 5EG as these sears are positioned inwards.

The noise from the galleys will cause discomfort to passengers of the seats 1C, 1J and 5C, 5E.

Location of the lavatory behind will cause inconvenience to passengers of the seats 4 L and 5G.

The seats of the economy class are divided into 2 sections divided from each other with an exit row.

Most of the seats here have 2-4-2 configuration.

Due to the exit row in front the seats 6AC and 6JL offer extra space for passengers’ legs.

Among disadvantages of these seats: lack of floor storage during take-off and landing, reduced width and proximity of the galley.

Missing windows make the seats 7A and 7L bad seats.

The only disadvantage of the seats 7C and 7J is close location of the galley.

Passengers of the seats 8DEGH will feel comfortable thanks to extra legroom but location of the galley in front may cause discomfort.

The seats 25JL, 26AC and 26DEGH are less reclining than standard.

Other passengers tend to congregate in the area of these seats while waiting to use lavatories thus causing discomfort to passengers of thee seats.

Thanks to the exit row located in front of the seats of the 27th row offer extra space for passengers’ legs.

However, as the tray tables are in the armrests the width of these seats is reduced a little.

Also there is no floor storage during take-off and landing and the noise from the lavatories may cause discomfort as well.

As there is no seat behind the seat 37H is often bumped by other passengers and crew members passing by.

The main disadvantage of the seats 40C and 40J is close location to the lavatory.

The seats 41AC, 41JL and 42DEH are considered bad seats due to limited recline and the noise from the galleys and lavatory located behind.

Thanks to visiting AirlinesFleet.com and read article : Iberia Fleet Airbus A330-200 Details and Pictures.

1 thought on “Iberia Fleet Airbus A330-200 Details and Pictures”