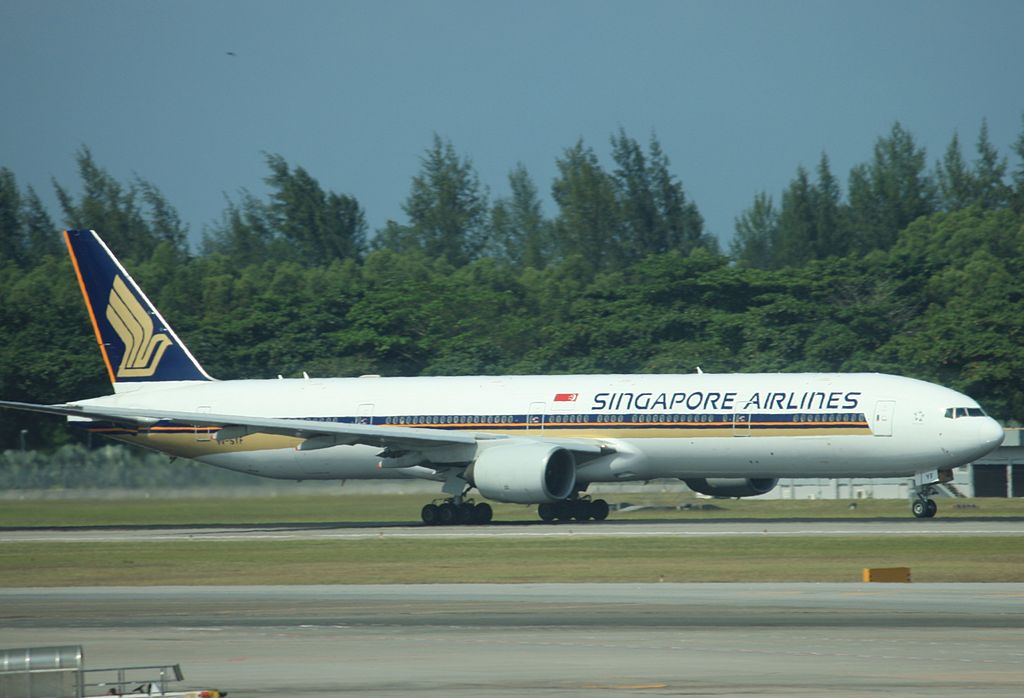 This aircraft have 3 class configuration, first, business, and economy class.

This Boeing 777-300 aircraft is one of the newest additions to the Singapore fleet and has updated seats and entertainment.

On the newest versions of this aircraft, every seat has a 110V AC power port and a USB port.

The first class cabin on the SQ B777-300 comprises two rows of seats in a 1-2-1 configuration, providing direct aisle access to all passengers.

It’s fitted with the 2006 Fseat which is now a little dated, but very comfortable for the shorter sectors this aircraft is generally now used for.

For couples the C / D middle pairs would be the obvious choice, while for solo travellers the window seats (A and F) make perfect sense.

We would have a slight preference for row 1 over row 2, in that it is slightly further away from the main business class galley directly behind row 2.

Seat 2A also has a bassinet position, so the right side (F) seats will provide a little more distance from a potential screaming infant, though it’s unlikely in this cabin.

As mentioned above, row 2 may suffer from a little more noise and foot traffic around the galley and toilets, but it’s likely to be marginal.

Singapore Airlines Boeing 777-300s are fitted with their regional business class product (again, remember we are not talking about the 777-300ER here, which all have flat-bed 1-2-1 seating).

Regional business is a 2-2-2 configuration with 172-degree recline (almost flat, but not quite!).

Luckily the 777-300 is now predominantly used on short flights so this shouldn’t be a significant issue.

For a short daytime flight it’s certainly quite acceptable, especially when travelling as a couple.

Overnight it’s one to avoid due to the angled bed (good enough for a daytime snooze in our opinion, but not conducive to a good night’s sleep).

There is a reasonably-sized privacy divider between each seat pair, but it doesn’t afford you the seclusion of the newest business class seats in the fleet, or of the first class seats on this aircraft.

Toilets are available at the rear and front of this cabin.

Seats 11 D/F and 12 A/C or H/K benefit from some additional legroom, though beware the infant bassinets are also at this row so there is a possibility of disturbance.

We usually hedge our bets about halfway down the business cabin (row 16) for this reason, especially on an overnight sector.

Rows 11/12: If there is a screaming infant in the bassinet, say goodbye to a peaceful flight if you’re seated here (otherwise, they are the best seats – see above).

Seats 17A & 17K: These “window” seats are missing an important element – a window! It bothers some people more than others – but avoid this row if you’re a fan of the view outside.

Row 20: Proximity to the toilets means more foot traffic and potentially more noise in this row.

Although there is a door area between row 20 and the first row in economy (row 31), be aware that row 31 has two bassinet positions and that some noise is therefore possible.

If travelling solo, one of the middle seats (D or F) is preferable. In the best case, no one will select the seat next to you, giving you ample extra space.

In the worst case, both you and the stranger next to you have unrestricted aisle access (i.e. you won’t be stuck in the window seat having to climb over their legs in the middle of the night, or vice-versa).

As a couple it’s up to you whether you prefer the middle D/F pair for the same unrestricted aisle access for each of you, or a window pair A/C or H/K.

The economy class cabin on the SQ 777-300 is configured over two similarly-sized sections, in a predominantly 3-3-3 layout.

There are a few good opportunities for couples to secure a rare seat “pair”, but unfortunately some of these seats have their drawbacks too.

Extra legroom seats can be found at row 31 on this aircraft, but beware of the two bassinet positions at 31D and 31G.

It’s easy to avoid proximity to the toilets and galleys by choosing a seat towards the front of the first economy cabin (we would suggest rows 31 to 38).

You do play a slight gamble with proximity to the bassinet row, so on an overnight flight, hedge your bets towards mid-cabin in the forward section in our opinion.

The rows directly behind them, which look the same on the seat map, come with drawbacks (see below).

Row 57: The last row on the aircraft suffers from missing windows in the A & K seats, and is close to the toilet and rear galley area meaning lots of foot traffic, queuing and noise around these seats. Avoid.