New technological innovations are being incorporated in the ATR-600 Series to further enhance the feeling of space, comfort and the pleasure of flying.

The ATR 72-600 benefits from the widest cabin in the turboprop market, with the new Armonia cabin, new ergonomic design for greater comfort, new seats and wider overhead bins with 30% more roller bags stowage.

Economy has 68 seats in a 2-2 config; this is pretty standard for these aircraft.

Legroom-wise, the Economy pitch of 76cm is average, though of course what that means for you depends on how tall you are.

Legroom is reduced in window seats (A and F) because the front seat’s leg is bolted right in the middle of your personal space. No way to place handluggage there.

Row 1 have extra legroom because of the front emergency exit.

Thanks to visiting AirlinesFleet.com and read article : Avianca Fleet ATR 72-600 Details and Pictures. 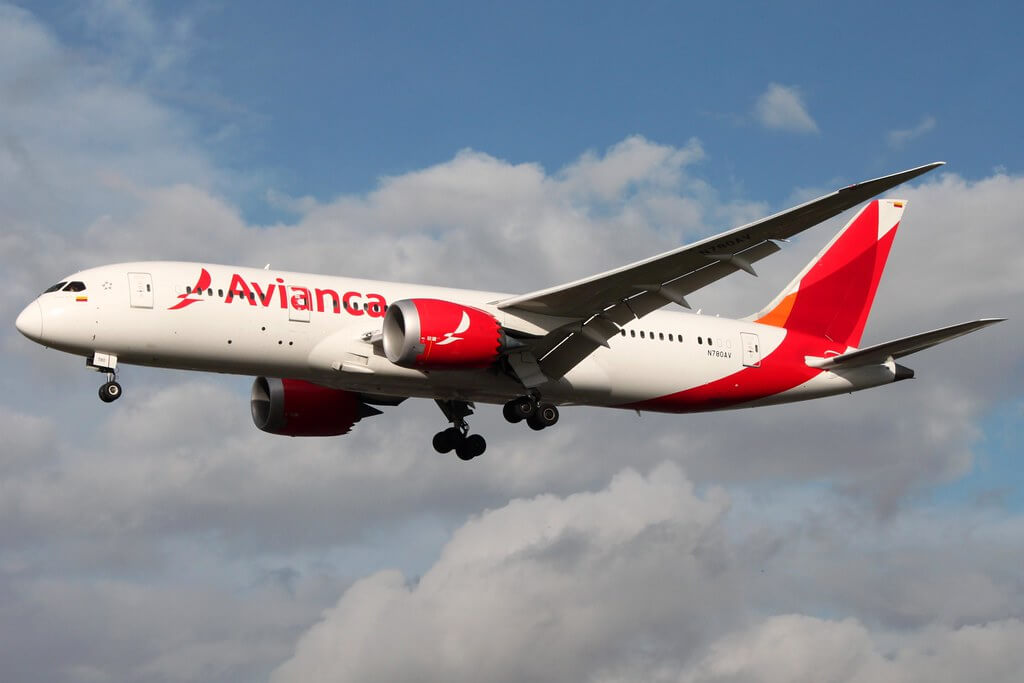 Avianca configured its Boeing 787-8 Dreamliner with 28 flat bed seats on business class cabin, and 222 standard seats on economy class. This cabin configuration is similar with Airbus A330-200/300.

The Boeing 787 Dreamliner is a long-range, mid-size wide-body, twin-engine jet airliner developed by Boeing. With a greater efficiency during flights as well as advance wing designs, the Boeing 787 has lower fuel consumption and can achieve higher speeds.

Some airlines operating the Boeing 787 Dreamliner, such as Kenya Airways, opt for the 2-2-2 paired seat configuration, which offers greater capacity but less privacy.

The cabin is spread across seven rows in a 1-2-1 configuration, offering direct aisle access to all passengers.

The cabin is spread in two sections with the larger forward cabin taking five rows of seats while the aft cabin behind the second set of doors hosting another two.

The seats offer plenty of storage space with a small compartment in the central console- ideal for storing small items such as headphones, mobile phones and glasses- whilst a larger compartment is located next to the seat which can ideally store tablets or small laptops along with other larger items. Below the central console, there is also additional storage space along with a bottle holder.

The angled seats also feature fast charging USB ports along with a multi-plug 110v AC charging unit and a reading light that can be adjusted to different angles.

As with most modern business classes, the seats feature lie-flat capabilities. Although there are three recommended settings on the control panel, passengers can control the seat to their own comfort and adjust recline, headrests and footwells as well as adjusting the seat front or back based on convenience.

Window seats face inwards towards the window, providing a great level of privacy for passengers and a view. Window lovers will appreciate this as they are placed in a good angle to look out of the window and take pictures.

On the Boeing 787-8 Dreamliner Avianca offers 222 standard economy seats on a 3-3-3 configuration. These seats come with 31-36″ pitch and 17″ width. There are 5 lavatories in the cabin and a service galley at the end of the plane.

IFE content included a good selection of movies, TV shows and music (both in video and audio). It also included the duty free sjop catalog and the option to order your purchases from the seat.

Wide-body aircraft Boeing 787-8 Dreamliner Avianca has 2 classes on board (Business and Economy) with total of 250 seats. 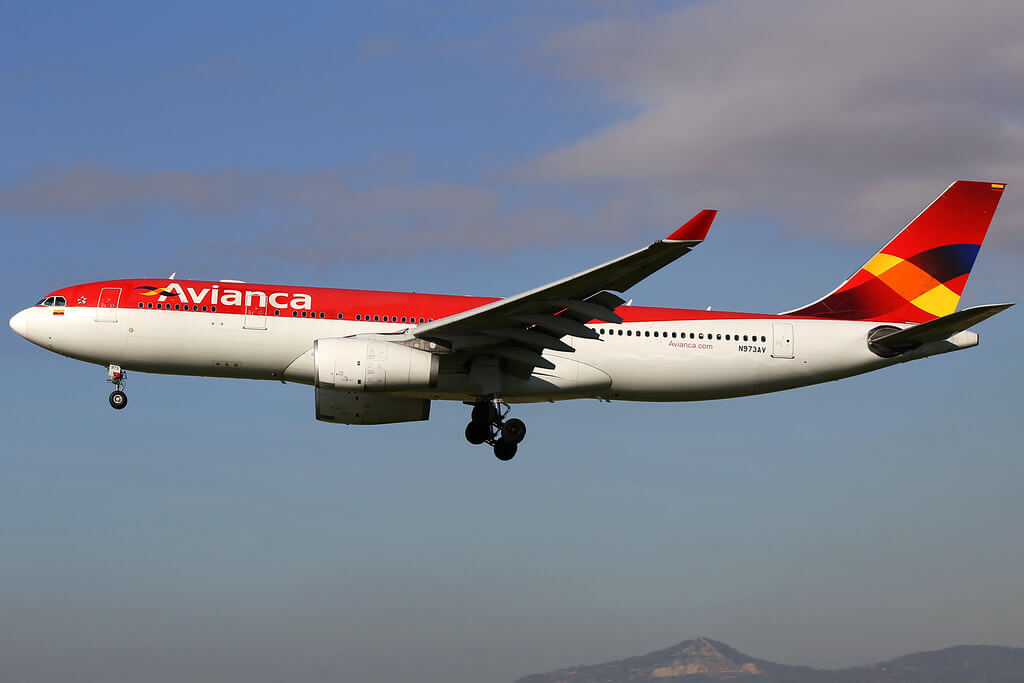 Avianca configured their passenger aircraft Airbus A330-200/300 with business and economy class. Total passenger of this aircraft is 252 seats (30 business seats, and 222 economy seats).

The twin-aisle wide-body aircraft provides all passengers with an abundance of personal space, and the modern cabin allows for 18-inch wide seats that can bring a level of comfort and relaxation to long-haul flights, even in economy.

The business class cabin is split in two. With three rows of business class seats found in the forward section, and a further two behind. There are 30 seats in total, laid out in pairs in a 2 x 2 x 2 configuration.

Rows 1 and 4 are bulkhead seats, meaning the TV screens are situated on the bulkhead in front.

The cabin we were on featured the newer grey, red and white interior, which was very smart, and professional and showed very little signs of wear.

The bulkheads and finishes found throughout the cabin were pretty standard, and it doesn’t feature art work or customized flooring for example, but as far as cabin designs go, it was very pleasant, and indicative of what you would expect of a business class cabin.

There are two toilets in the business class cabin, both featuring L’Occitane skincare, which is ample for a 30 seat cabin.

Avianca’s older generation seats are very much the traditional angle lie flat seats that many carriers still have across much of their fleets.

The forward facing seats are very comfortable in a variety of positions, and recline to an almost fully flat bed that angles slightly towards the floor.

The bulkhead seats feature a fold out footrest whilst the rest of the cabin doesn’t, which depending on your height can add extra comfort as you sleep.

On the seat back, there is a nice HD monitor with the magazine compartment placed in the middle.

A bottle holder is placed beneath the magazine compartment while there are jacket hangers on the sides of each monitor.

A small switch on the sides allows the opening of the 2 small storage compartments underneath the monitor and they are useful for placing your phones, passport and boarding passes.

Below the armrest there was a ledge where the headphones were placed at. These headphones were not wrapped in any plastic and seems like a normal over-the-ear models distributed commonly in Business class cabins.

Thanks to visiting AirlinesFleet.com and read article : Avianca Fleet Airbus A330-200/300 Details and Pictures. 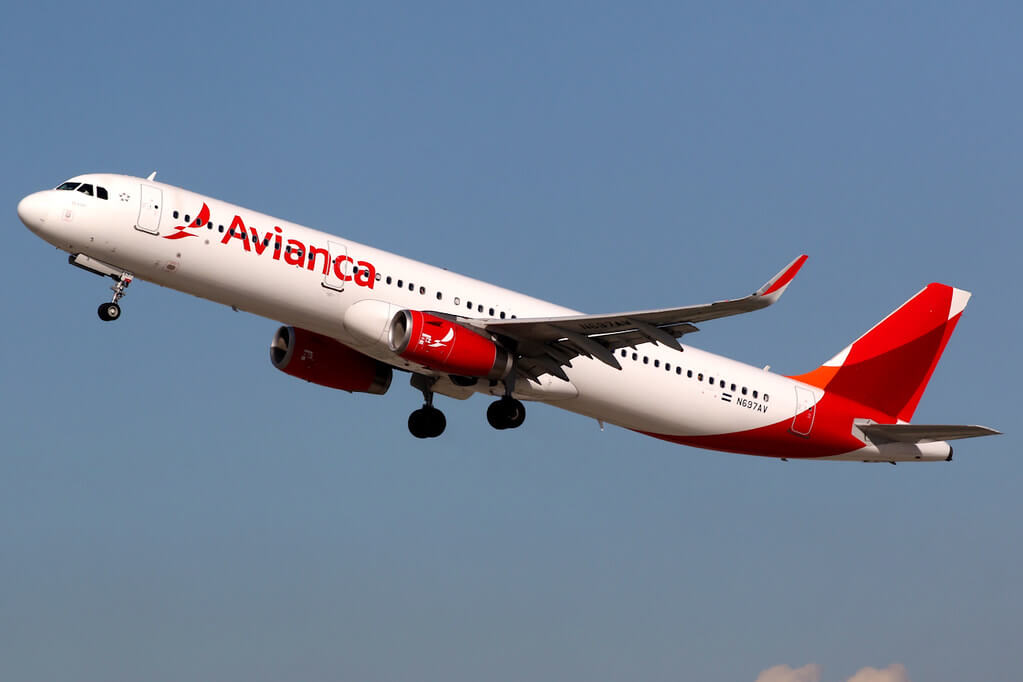 The industry-leading quality and efficiency of Airbus’ A320 Family – of which the A321 is a member – has been further enhanced with its new engine option (NEO) jetliner versions.

For the A321neo, Airbus expanded seating capacity with optimised use of cabin space, increased exit limits and a new cabin door configuration.

The Avianca Airbus A321-200ceo/neo features 194 seats in a 2 cabin configuration. Economy has 182 seats in a 3-3 config; Business class has 12 seats in a 2-2 config; this is pretty standard for these aircraft.

Narrow-body aircraft Airbus A321-200ceo/neo Avianca has 2 classes on board (Business and Economy) with total of 194 seats. 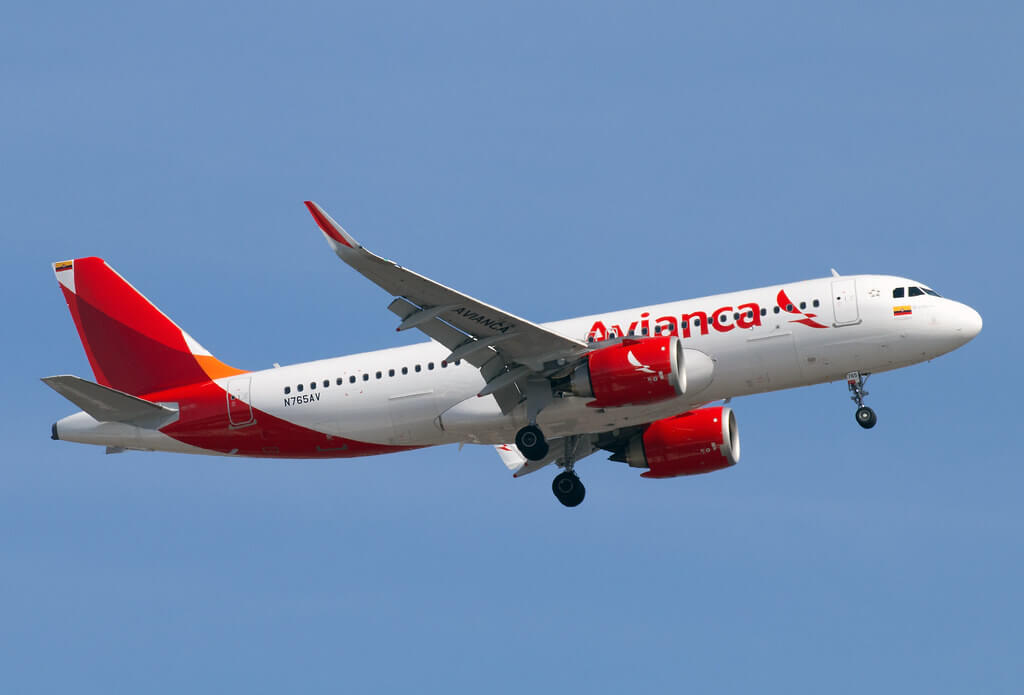 The A320neo (new engine option) is one of many upgrades introduced by Airbus to help maintain its A320 product line’s position as the world’s most advanced and fuel-efficient single-aisle aircraft family.

The baseline A320neo jetliner has a choice of two new-generation engines (the PurePower PW1100G-JM from Pratt and Whitney and the LEAP-1A from CFM International) and features large, fuel-saving wingtip devices known as Sharklets.

The business-class cabin consists of 12 plush recliners arranged in a 2-2 configuration. Each offers 40 inches of pitch and measures 22 inches between armrests, providing plenty of width. There’s a curtain in the rear of the cabin to separate the cabins.

Despite the generous amount of pitch at each seat, the overall bulk of the seat’s padding and ample recline can make your area feel tight if the person in front of you reclines fully.

The in-flight entertainment screen is a large literature pouch, and each seat has an adjustable footrest. However, one downside of these seats is the lack of under-seat storage.

The bi-fold tray table was wisely designed with a support on the far armrest. The table measured 21 inches wide by up to 10.5 inches deep and could be shifted forward or back.

Two universal power plugs were located below knee height between the two seats. There was also a USB plug built into the IFE screen.

Instead of reclining, the entire seat slides up an down a plastic track behind the chair.

Narrow-body aircraft Airbus A320-200/neo Avianca has 2 classes on board (Business and Economy) with total of 150 seats. 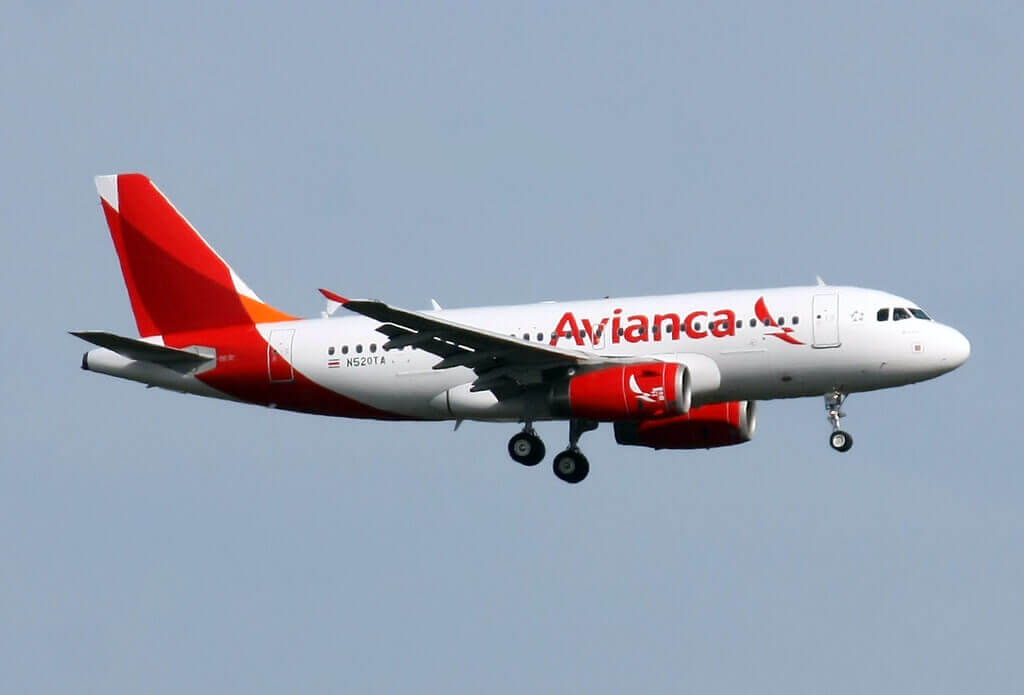 Avianca flies this aircraft with default cabin configuration business and economy class (similar with the Airbus A318-100). The Airbus 319-100 seats up to 138 passengers and – like all the other members of the A320 family – has a spacious feel.

The seating configuration for Business and Economy Class is flexible and can be varied according to preference.

The A319 – a shortened-fuselage member of Airbus’ A320 Family – continues to prove its versatility by providing a range of seating options, from the 110-seat configuration to a capacity of up to 160.

The A319 has the same optimised cabin cross-section as its fellow A320 Family members (A318, A320 and A321) – which is the widest single-aisle fuselage on the market. This allows for top-of-the-range comfort with generous seat width, or an extra-wide aisle for fast turnarounds.

The A319 is used on various short- and medium-haul routes.

Business class is three rows of 2-2 leather recliner seats.  They weren’t the fanciest, but on par or better than most US carriers’ domestic first class product. They were fairly comfortable, with individual footrests.

At boarding, there was a blanket and pillow at each seat, a newspaper and headphones in the seat pocket.

Each seat has both USB and AC power, and a somewhat small personal IFE screen.

The seats were similar to those on Aeromexico’s 737 in business, but little wider.

The tray mechanisms were a little faulty, and led to a slope when using the tray.

Thanks to visiting AirlinesFleet.com and read article : Avianca Fleet Airbus A319-100 Details and Pictures.