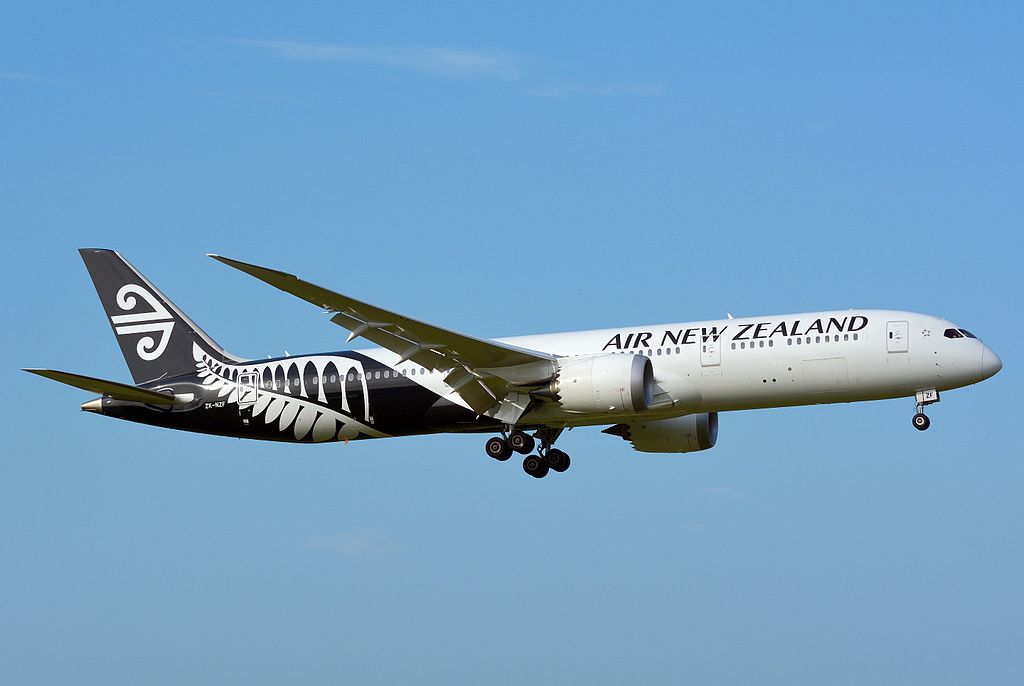 Ceremony with participation of one thousand employees of Boeing company and management of New Zealand airline company took place in Seattle (Washington state) on July 9th 2014.

It departed Seattle on 7 a.m. local time and overnight into July 12th has landed in Auckland.

Air New Zealand operates the Boeing 787-9 Dreamliner in a 3-class configuration on routes from Auckland to Perth, Shanghai and Tokyo.

The Premium Economy on the 787-9 is not the ANZ Premium Economy “Spaceseat” product, but instead is manufactured by US Seat Designer, Zodiac, and is referred to as a “Business-lite” seat.

These seats have 9″ recline and a 5″ wide armrest.

In addition passengers in Premium Economy will have an integrated leg rest with extendable foot support and an adjustable winged head rest.

Economy Class is configured in a 9 abreast, 3-3-3, configuration with 263 slimline Economy Class seats with a flexible head rest.

Economy Skycouch seats are featured on this aircraft and are available for purchase at an additional cost.

Air New Zealand’s description states that the Economy Skycouch is a row of three Economy Class seats that together create a flexible space for whatever you want it to be – an area to relax and stretch out in, or for the kids to use as a play area.

The 787-9 includes all of the standard Dreamliner features – larger windows, higher humidity, a lower cabin altitude and cleaner air – but in its 302-seat configuration, it will be divided into four classes – Business Premier, Premium Economy, Economy Skycouch and Economy.

At the front end of the aircraft, passengers will be able to make use of lay flat beds, Premium Economy will offer a 41-inch seat pitch in customised seats designed by Zodiac, and in Economy, the customised, slim-line Zodiac Economy seat offers more space and a flexible headrest.

In between Premium Economy and Economy, there will be 14 rows of Economy Skycouch – Air New Zealand’s own seating design, which allows three seats to be converted into a single couch.

As for the in-flight entertainment (IFE) onboard the 787-9, Air New Zealand is again displaying its appetite for innovation, having opted for the Android-based Panasonic eX3 system.

Other carriers do offer Panasonic’s Android-based product – including Norwegian on its 787-8 Dreamliners, but Air New Zealand has gone a step further to ensure its offering has a unique spin.

This airplane may accommodate 302 passengers in three classes: 18 in the business class, 21 in premium economy and 263 in the economy class.

Business class seats are located in the first 6 rows per 3 in each of seats and have 180 degrees recline.

All these seats are standard.

Only the seats of the 1st row have such a disadvantage as proximity of the galley and lavatory.

Also these seats offer bassinet locations for passengers with babies.

Premium economy class consists of 3 rows of seats that have 2-3-2 configuration.

For passengers travelling with babies the seats of the 23rd row have bassinet locations.

263 seats of the economy class are divided into two sections.

The main disadvantages of the seats 34JK and 35DEF are: location of the galleys and lavatory in front, reduced width of the seats and lack of floor storage during take-off and landing.

Passengers of the seats 35ABC will take advantage of extra legroom.

However, proximity of the lavatory and galleys, reduced width and lack of floor storage will cause discomfort to passengers of these seats.

As there is no seat in front the seat 35H gas extra space for passengers’ legs but at the same time this seat is often bumped by other passengers and crew members passing by.

ABC seats of the rows 36-43 as well as the seats HJK of the rows 36-41 when purchased together may be converted into Economy Skycouch by raising extendable foot rest and creating couch-like seat that gives additional personal room and comfort during long-haul flights.

Location of the lavatories behind and limited recline make the seats of the 49th row bad seats.

The second section of economy class seats has 16 rows.

Thanks to the exit row located in front the sears 50ABC and 50HJK provide passengers with extra legroom.

Among disadvantages: the noise from the galley and lavatories located in front, reduced width because the tray tables and TV are built-in the armrests making them immovable and lack of floor storage during take-off and landing.

Close location of the galley, reduced width of the seats and no floor storage during take-off and landing are the main disadvantages of the seats 52DEF.

Passengers tend to congregate in the area of the seats 63ABC, 63HJK, 64DEF and 65DEF while waiting to use lavatories and thus causing discomfort to passengers of these seats.